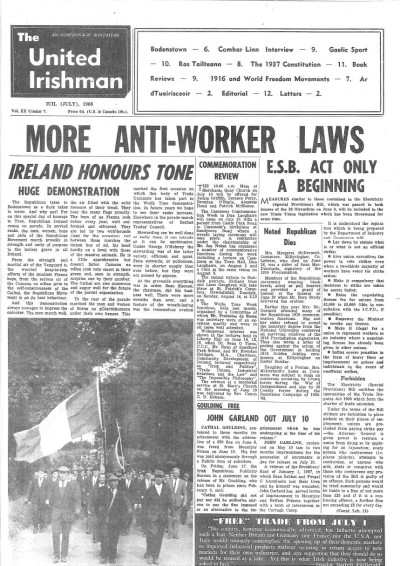 Many thanks to the person who forwarded this to the Archive – a very appropriate document to have as the last for 2016.

This edition of the United Irishman published by Sinn Féin in 1966 joins others in the Archive and adds to building a picture of that party and movement at that point in time.

Its focus is on a range of areas. the front cover includes pieces on ‘More Anti-Worker Laws’ arguing that the Electricity (Special Provisions) Bill of 1966 was but the first of many anti-worker measures. Another piece notes the then recent Bodenstown Commemoration where”

In serried ranks the men, women, boys and girls of the Republican Movement march proudly in strength and unity of purpose o the holiest grave in all Ireland.

And this demonstration always manages to the impress the onlooker. The men march well, the air filled wight he solid measure of their tread. They bear the many flags proudly. The boys of na Fianna look better every year, well uniformed and officered. They are led by two wolf hounds (lent for the occasion) and between them marches the tiniest boy of them all, his head hardly on a level with those of the massive animals. He is a little apprehensive but doesn’t falter. Cumann na mBan look very smart in their green, and, seen in strength, surprise one by their number. The Cailini are also numerous and augur well for the future of the parent organisation.

And – perhaps hinting at changes:

To the rear of the parade marched the men and women of Scéim na gCéardchumann under their own banner. This marked the first occasion on which this body of Trade Unionists has taken part in the Wolfe Tone demonstration. In future years we hope to see their ranks increase. Elsewhere in the parade march representatives of Belfast Trades’ Council.

Another front page article notes that Cathal Goulding had, after being given a sentence of three months, been released early after a fine was paid on his behalf. It notes that he did not pay ‘nor did he authorise any one to pay the fine’. It also notes that John Garland was due for release later in the month after imprisonment for possession of documents.

An interesting letter is published on the second page where the secretary of the Cumann Tomas Mac Curtain in Corcaigh takes the UI to task for ‘featuring photographs of well-known active anti-republicans’. The editor lists those pictured including Goulding, George Dearie, Hugh McAteer, Willima Bugler Yeats, harry White and Peadar O’Donnell.

A piece by Eamonn Mac Thomáis looks at James Fintan Lalor. There is the full text of the oration at Bodenstown by Seamus Costello. This includes the following:

It is your duty to spearhead the organisation of a virile cooperative movement among the farming community. It is also your duty to use your influence as Trade Unionists to organise a militant TU movement with a national consciousness. In short it is your duty ton become active hard working members of each and every organisation that is working for the welfare of all the people and towards the reunification of the country.

It also has the following:

The lesson of history shows that in the final analyse the Robber Baron must be disestablished by the same methods that he used to enrich himself and retain his ill gotten gains, namely force of arms. To this end we must organise, trained and maintain a disciplined armed force which will always be available to strike at the opportune moment.

Other pieces include Kadar Asmal writing on 1916 and 20th Century Freedom Movements, a report on Rás Tailteann, 1966, an interview with the General Manager of Comhar Linn and the help it offers co-ops, a variety of book reviews, a sports section examining GAA and a piece examining the 1937 Constitution.

Finally the editorial calls on every ‘working man’ to ‘Stand Guard’ against anti-Union legislation with the lines:

Lemass has a fight on his hands. The Unions have a fight on their hands too. Let Republicans throw their weight on the side of Democracy, on the side o those whose best interests are at stake in the coming battle. 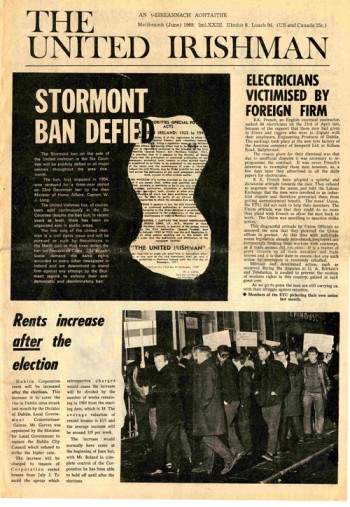 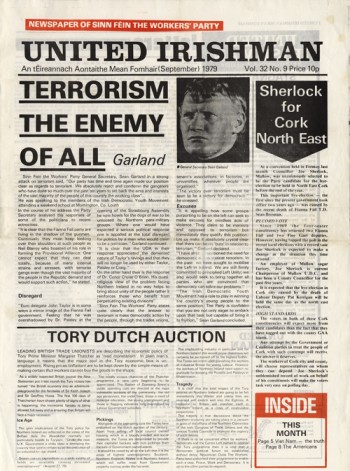 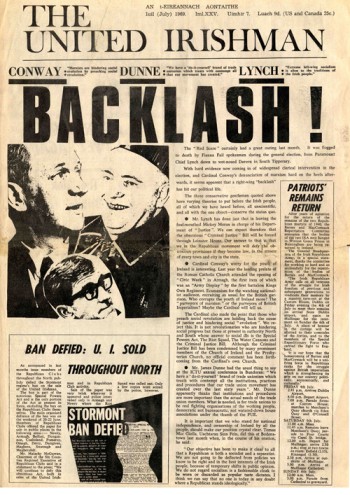