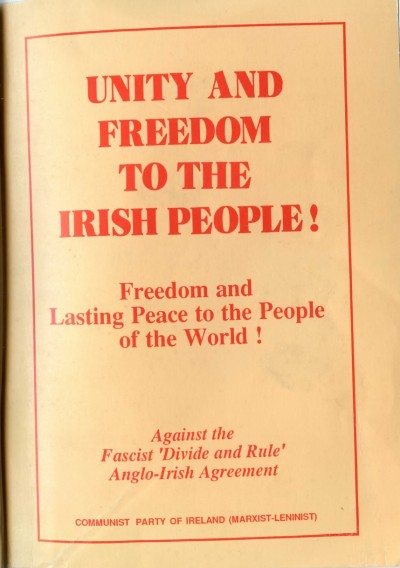 This document adds to the collection of materials engaging with the Anglo-Irish Agreement in the Archive. At 132 pages it is remarkably comprehensive. The contents are divided into four sections. Part One considers ‘Fascist terror in north to conjure up bogey of ‘civil war’. Part Two engages with ‘The Promotion of the illusions and the taboos of bourgeois ‘democracy’. Part Three is ‘The Anglo-Irish Agreement – its ‘Irish dimension’ and its ‘International dimension’. Part Four is ‘the Necessity facing our generation – revolution’.

The Introduction gives a good sense of the overall approach of the document. It argues that the publication…

…is being released… to expose the savage and all-sided ideological, political and military offensive being waged against the Irish people by the foreign aggressor, British imperialism, under the current Anglo-Irish Agreement. This is a criminal attempt to snuff out our rights as a nation to national independence and re-unification by crushing the ongoing heroic patriotic resurgence against the illegal British colonial occupation of the northern 6 counties of Ireland.

This offensive of British imperialism is being waged with the active connivance of the national traitors of the Irish monopoly bourgeoisie, and with the sinister backing of US imperialism, one of the two superpowers, and the EEC powers, members of the warmongering US-led NATO bloc (and partners in crime of our national enemy, British imperialism) in contention with the Warsaw Pact bloc led by the other superpower warmonger, Soviet social imperialism.

The exposure of this sinister conspiracy against the Irish nation, posed by the Anglo-Irish Agreement, is an integral part of the work of the proletarian Party to politically organise the working class and unite and mobilise the masses of the people of Ireland for the revolution, which is the necessity facing our generation, the necessity which we face as Irish people to achieve our nation’s ancient and just cause of national freedom and the necessity which we face in common with the working class and all the nations and people of the world to avert world war by making our contribution to the overthrow of the system of world imperialism, headed towny by the two superpowers, US imperialism and Soviet social imperialism which is the only basis for such wars.

The conclusion is that:

The necessity facing our generation is to bring to fruition the centuries of struggle and the sacrifices of generation of the Irish people, in particular the heroic sacrifices and struggles of the people of the north over the last 18 years, in the final conflict – the insurrection of the entire Irish nation for the complete military defeat and wholesale expulsion of the foreign aggressor, British imperialism, from the northern 6 counties and from Ireland as a whole, achieving national liberation and establish the new Ireland, the IRISH REPUBLIC, in which the masses of the Irish people hold state power as laid down in the solemn and binding declaration, the historic PROCLAMATION OF 1916 OF POBLACHT NA H EIREANN, and thereby for the first time are in a position to decide their own destiny, including the form of their society and government, freed of foreign interference and its internal agencies of native betrayal. 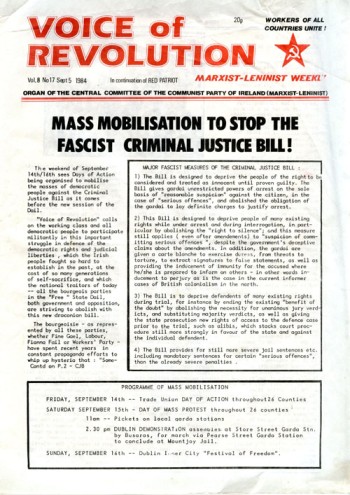 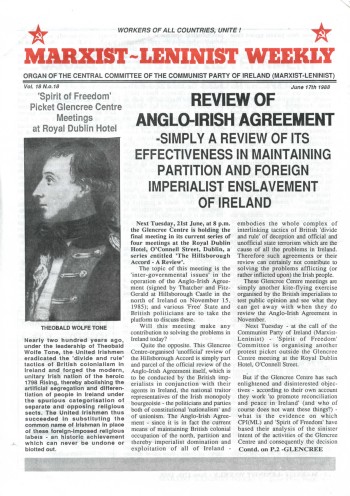 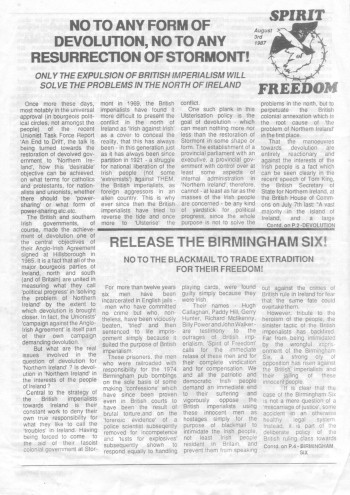