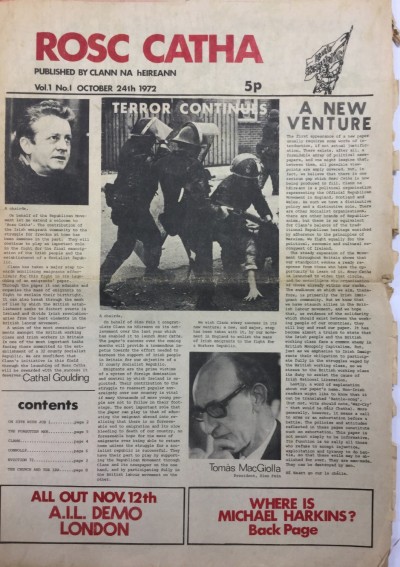 Cathal Goulding writes a welcome for the new publication:

The contribution of the Irish emigrant community to the struggle for freedom at home has been immense in the past. They will continue to play an important role in the fight for the final emancipation of the Irish people and the establishment of a Socialist Republic.

Clann has taken a major step towards mobilising emigrants effectively for this fight in its launching of an emigrants’ paper. Through the paper it can educate and organise the mass of emigrants to fight to reclaim their birthright. It can also break through the mesh of lies by which the British establishment seeks to distort events in Ireland and divide Irish revolutionaries from the best elements in the British Labour movement.

A union of the most conscious elements amongst the British working class and Irish workers in Britain is one of the most important tasks facing those committed to the establishment of a 32 county Socialist Republic.

Tomás MacGiolla, writing as President of Sinn Féin, also provides a welcome. He notes that the name of the paper is as follows:

Non-Irish readers might like to know that it can be translated ‘Battle-song’, (but not, wits should note, ‘War-Cry’ – that would be Gáir Chatha). More generally, however, it means a call to arms or an exhortation before a battle. The policies and attitudes in these pages constitute such an exhortation. This paper is not meant simply to be informative. Its function is to rally all those who refuse to accept injustice, exploitation and tyranny to do battle, so that these evils may be abolished for ever. They are man-made. They can be destroyed by men.

The newspaper is eight pages long and has a broad range of articles. These include pieces on the recent builders strike, the IFA, eviction in Ireland, a full page on the eighth Clann Ard Fheis. This is interesting in relation to its exhortations for the Clann to ‘be tireless in impressing upon British Socialists and Trade Unionists the truth of Marx’s considered judgement, that for the English workers ‘the national emancipation of Ireland is no question of abstract justice, of humanitarian sentiment, but the first condition of their own emancipation’. It notes the common enemy, capitalists. It also notes that the object in relation to emigrants is to ‘ raise class consciousness and raise national consciousness’. And intriguingly it has a considerable emphasis on the Irish language.

There’s a page on the Prisoner’s Aid Committee – focusing in part on Eamonn Smullen and a review by Peter Berresford-Ellis of Garret Fitzgerald’s book, Towards a New Ireland. Connolly features in a page long meditation on his thoughts on North-East Ulster and the Orange Working Class. There’s also a long piece on Communism, the Church and the Working Class. 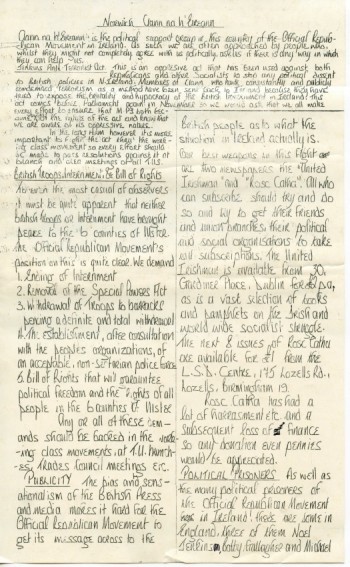 Clann na hÉireann in the archive

Clann na hÉireann was the support organisation for Sinn Féin in Britain, established in 1964. It remained associated with Official Sinn Féin after the Republican split in 1969/70. It published Rosc Catha from 1972.…

Rosc Catha was the newspaper of Clann na hÉireann, the emigrant organisation and support group for Official Sinn Féin in Britain.…

See Rosc Catha in the archive