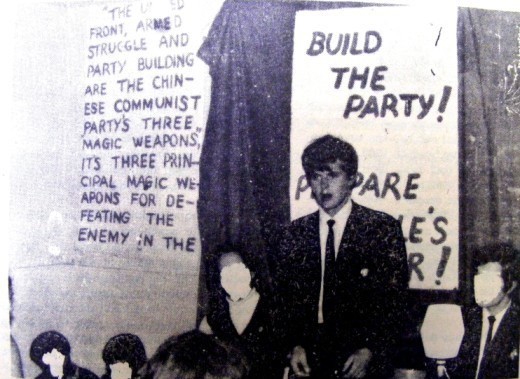 When The Internationalists were first set up in Trinity College Dublin in November 1965, it was not as a fully-formed Marxist-Leninist party, but ‘as an exercise in better staff-student relations.’ 1 Prominent among the initial group was Hardial Bains, a lecturer in bacteriology who was originally from India, but who had left for Canada in 1959 and had completed his post-graduate studies in Vancouver at the University of British Columbia. Bains was a former member of the Communist Party of India, having resigned in protest at the party’s endorsement of Khrushchev’s criticisms of Stalin. In March 1963 he founded a political group in Vancouver which was called The Internationalists (later the Communist Party of Canada (Marxist-Leninist), and while the November 1965 TCD group may not have been exactly an Irish version at this stage, the choice of name suggests Bains’ strong input from the start.

Also among those involved at the early stages of the group were two African students, David Akerele and Koye Majekodunmi, and staff members Kader Asmal (who was then head of the Irish Anti-Apartheid Movement), Professor David Webb  (Professor of Botany), Dr. Owen Sheehy Skeffington  and Dr. R. B. McDowell . Given such participants it is highly unlikely that The Irish Internationalists were at this stage in any way Marxist, or even socialist.

This loose discussion group held meetings with titles such as “Academic Freedom” and “The Function of a University”, and continued until October 1966, when the decision was taken, presumably by Bains and his supporters, to establish a more disciplined organisation which would focus on ‘which theory we are going to follow, which motivation we should have, which class we are going to favour’ 2.

It was at this stage that people like Asmal, Webb, Skeffington and McDowell began to drift away, leaving Bains as the undoubted central influence.

Sometime towards the end of 1966 the group renamed itself the Trinity Internationalists, and began to issue a periodical entitled Words and Comment. There were at least eleven issues produced between 1966 and 1968, and Trinity’s library has at least seven of them for those privileged enough to have access 3.

‘People do not stop to think that museums, like history itself, are the creation of the ruling class.’

The main thrust of Necessity for Change appears to be towards students and academics, in that its criticisms are of intellectual production, and the intellectual industry, in the Western world. The control of ideas, of history, of ‘common sense’ by the ruling class needs to be challenged, first by a cadre who have un-taught themselves the prevailing ideas and have begun to see the world based on reality rather than the dominant, right-wing, intellectual discourse; then by the working class who will benefit from the intellectual and individual gains made by the cadre once these new ideas, and this new way of thinking, make their way into the working class through the actions of the cadre itself.

Anti-consciousness – the forced acceptance of a set of values and beliefs which are, in fact, not acquired by the act of finding out but by the act of consciously suppressing any findings which might contravene and contradict the so-called ‘ways of the civilised world’ (p.27). Almost all of us live and think within the realm of anti-consciousness. The job of the Internationalists is to expose this false reality – first to themselves, then to others – and to engage in ‘understanding’ which requires ‘an act of conscious participation by the individual, an act of finding out.’ In other words, we have to break down this false reality which has not only subsumed society’s thoughts but our own as well, and then begin the long, hard struggle of ‘finding out’ by observing the world as it is, not as the ruling class portray it.

Historical crib – “The particular prejudices of a society, transmitted through parents and social institutions, constitute the historical crib into which we are born. Like the womb of the mother, it provides us with everything we need. Our purpose and our goal are defined, that is, how to receive nourishment and how to be grateful for it. The historical crib gives us a perspective with which to look at the world and the people in it, including ourselves. We only see those things, which can be correlated with that perspective. This perspective is the active blindfold of anti-consciousness. Whenever we see through the blindfold we destroy that consciousness by using all kinds of cultural and historical crib-arguments. In other words, we destroy our understanding by camouflaging our experience. The covering up of experience precludes development. Thus we can never grow up and confront the ‘various classes of people who have usurped power by force’ as long as we are unconscious of that historical crib”(pp. 30-31). This historical crib, though, does not serve the needs of the individual, only the ruling class. Nonetheless, its pervasiveness is such that it envelops each individual in a ‘cocoon of loyalty’ from which it is extremely difficult to break. ‘One’s birth requires the destruction of that cocoon, but the self denies itself the will to so so’ (p.33).

‘Various classes of people who has usurped power by force.’ – The ruling classes.

History-as-such – history as taught in schools and universities – essentially the history of the ruling class, from the perspective of the ruling class. The common,accepted conclusions of history. ‘It is always about kings and queens, rajahs and maharajahs, sheiks and inmans, warlords and landlords, and their hand-picked agents… People are compelled to learn that history by heart.’ (p.28) Crucially, this history teaches that ordinary people have no role to play in history, that they are powerless to make their own history.

Will-to-be – Despite the best attempts by the ruling class to propagate a hermetically-sealed compliant consciousness, there is a contradiction, a conflict, between the individual and society. There is something inside all of us which is ‘straining to be free in order to see the light… It is a reflection of class struggle going on in our society. This will-to-be is the spontaneous reflection amongst human beings of what they are struggling against in society.’ (p.33)

In April 1967 the group were given temporary use of a cellar in Trinity by the college authorities for the purpose of producing a newspaper for circulation. Four months later, in August, the Internationalists held a conference in London where they discussed their ideas with other elements of the British and Irish left. It lasted for two weeks, and among the groups invited were the Irish Communist Organisation (later the British and Irish Communist Organisation) who were also anti-revisionists. Talks of a merger between the two groups came to nothing, and in fact a serious animosity developed, one which played itself out on the pages of the two groups’ respective publications for the next ten years.

Towards the end of 1967, after the London conference, the Trinity Internationalists start to become more vocal and agitational. Around this time (1967/68) they produced a manifesto which called for reform of the internal structures of Trinity College. According to a highly-partisan article in the Irish Times (14 Jun 1968) entitled ‘A Cranky Set of Outsiders’, Michael Heney said that the Internationalists

… accuse it [TCD] of being a bourgeois-aristocratic educational institution, connected with British colonialism, geared to the reactionary training of students, and giving active support for the ruling and wealthy classes by the inculcation of bourgeois ideas and culture on the students.”

The influence of Necessity for Change! is clear – ‘reactionary training’, ‘inculcation of bourgeois ideas and culture’, ‘active support for the ruling and wealthy classes’ – all central ideas from the discussion group and pamphlet.

The group produces an enormous quantity of literature throughout the three academic terms of the year. Words and Comment is their main organ, a weekly publication, but there is also the more occasional Irish Student, and numerous other works, including pamphlets hurriedly produced on the occasion of some issue arising, and volumes containing extensive re-prints from the writings of Chairman Mao, and other Communist leaders.

The previous day (13 June) he wrote that the Internationalists numbered about 30, the majority of whom were foreign students, although at least six were Irish. These included John Dowling from Dublin, Arthur Allen from Drogheda, and Simon Stewart from Belfast.

In 1968 the leader of the Trinity Internationalists was Nick Miller, a final-year natural science student from England. In August of that year he was suspended from the college for failing to sign an undertaking to obey the rules of the college. Miller never returned to complete his studies, but according to Dublin University Climbing Club  by 1971 he had left radical politics behind and was working for his father’s company.

According to Nusight, The Internationalists at this time ‘lived communally, shared all their earnings, rose at a certain time for pre-breakfast study sessions, and often worked an 18 hour day bill-posting around the city or stapling magazines.’ 4 It also said that

In the summer of 1968 they burst upon the public consciousness when they protested against the visit to Trinity of King Baudoin of Belgium. There were some minor scuffles with the gardai and right-wing students which attracted scare newspaper headlines and silly editorial condemnation of students in general by the Sunday Independent and the Evening Herald. In 1968 they opened up a bookshop in Townsend Street in Dublin. This attracted a small number of young people of working class background, most of whom were in school. They formed the People’s Rights Group and published an agitational broadsheet of the same name… The bookshop closed late last year (1969) when the lease ran out. Since then the Maoists have opened another bookshop in Exchequer Street. The People’s rights Committee, along with the Maoist students, provided the basis for the setting up last October (1969) of the Irish Communist movement (Marxist-Leninist), the major Maoist grouping at present.

Attempts were made to set up bookshops in Cork and Limerick. The bookshop in Cork was attacked by a crowd one evening, while the bookshop in Limerick was the centre of a scare campaign by Steve Coughlan, the Labour Party’s Lord Mayor of the city. Both events warrant separate posts.

In July 1970, The Internationalists merged with Irish Revolutionary Youth, and formed the Communist Party of Ireland (Marxist-Leninist).

The Communist Party of Ireland (Marxist-Leninist) originated as The Internationalists in Trinity College Dublin in 1965, founded by Hardial Bains. It was an anti-revisionist party, initially Maoist and later supporting Albanian leader Enver Hoxha following the Sino-Albanian split. The party was officiallly dissolved in 2003, following a long period of inactivity.