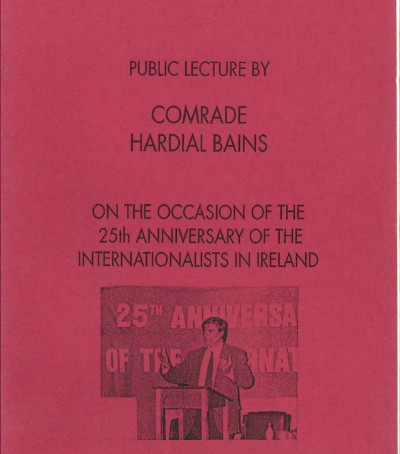 A fascinating document this week from the CPI-ML, and I’m once more indebted to the donor, which contains the text of a lecture given by Hardial Bains on the 25th Anniversary of the Internationalists in Ireland, later known, of course, as the Communist Party of Ireland (Marxist Leninist). The lecture was given in TCD on December 9th 1990.

It was, and the lecture references this, momentous times that led, to the expression of perhaps uncharacteristically optimistic thoughts by Bains (who in some respects was a Johnny Appleseed of anti-revisionism, for which read an almost unvarnished support for Stalinist nostrums ).

There are grave dangers too, because while the subjective factor at this time is till very undeveloped, the US, Britain and others continue pushing for solutions of problems between states through force. What Saddam Hussein has done can only be condemned, but what the US has done is equally condemnable. The use of the UN Security Council for the ends of the big powers is also condemnable.

Bains considers the world in light of some intriguing analysis…

The 1960’s were a period of relative expansion of capitalism after a brief period of decline. It began in the 1962-66 period and carried on. Its temporary revival made the new affluence of this period possible. This expansion was based on three main factors: first, the Kruschevite betrayal and the consequent opening up of Eastern Europe for investments by various capitalist countries; second the use of consumer credit and of the state as the instrument of creating money by incurring huge fiscal debts; and third, the intensified neo-colonial exploitation of the rest of the world.

Yet, for all that aspects of that are highly questionable (hard to seriously sustain the thesis that Kruschvite ‘betrayal’ led to opening up of Eastern Europe to investment in such a way as to make a profound difference) he makes some insightful points:

The result of this temporary expansion was a general euphoria, a feeling that capitalism had become young again and invincible.

And curiously, through the analysis weighted down as it is with the particular issues that exercised the approach of the Internationalist and CPI (ML) there appears to be some actually quite serious thinking going on.

Although, for those of us who knew the public face of the CPI (ML) what to make of the following?

The same is true for problems of workers and women [as it is of youth], or for the national question in various Western countries as well as the East, the Soviet Union and so on. These questions cannot be solved by merely expounding some correct views. And force can be helped by preaching some principles at it, by insisting from the sidelines that it reject everything which is evil and embrace everything which is good.

The attitude towards the Irish ‘national question’ is also interesting:

When I say we supported their [Irish] struggle, and continue to do so, without any reservation, I draw a contrast with those who gave it “critical support”. To wage an armed struggle is not a simple matter. There are problems which arise and mistakes which are made. But to carry forward this patriotic struggle has great significance. The British have historically divided many countries. Yet, they made a lot of noise for the re-unification of East and West Germany and shed a lot of crocodile tears. But what about Ireland, which is still divided? The Irish people, by carrying on their struggle, are not recognising this division which is being imposed by imperialism… Those who criticise the patriotic movement or the armed struggle from various angles are making a very serious mistake. In my opinion, if you want to criticise them, join them. It is by joining them you can correct them, not by sitting on the sidelines.

There is a discursive piece from page 24 onwards that gives a real insight into the character of Bains, not least in the language which in some respects is as much a product of the campuses of the 1960s as of Marxist Leninism. 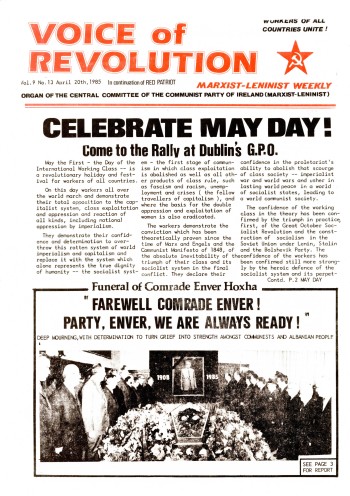 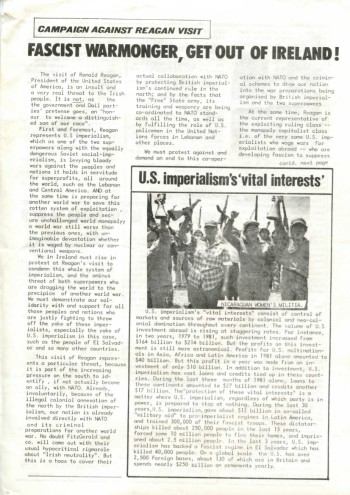 Campaign Against Reagan Visit: Fascist Warmonger, Get out of… (1984)