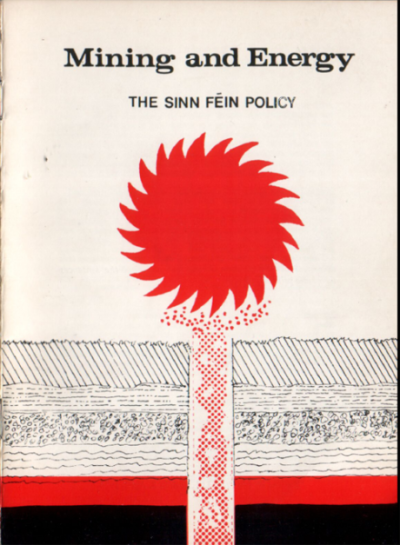 This well presented document, issued by Provisional Sinn Féin in 1974, attempts to engage with the area of Mining and Energy. What is notable about it is that it is one a broad range of policy materials issued by PSF during this period on a number of issues, many of which are being posted to the Archive in the New Year. This somewhat blunts the impression that PSF was focused on independence and unity to the exclusion of all else. However it is fair to say that, naturally, Sinn Féin positioned the issue of Mining and Energy in the context of national independence.

Because the Republican Movement believes that the irish people are on the verge of victoy in the age-old struggle for national liberation it has shown an increasing awareness of the necessity to initiate, promote and develop political policies which can be put into action as soon as Britain declares her intention to get out of our country. The partitionist settlement of 1921, exposed as the betrayal Republicans have always held it rob e, is crumbling before the inspiration of a New Ireland.

The SF Éire Nua document, first published in January 1971 (some 16,000 copies have been sold to date) outlined 10 fundamental feature so the Republican Social and Economic Programme. it also contained detailed policies for specific sectors in chapters dealing with Finance, Education, Industry, Agriculture, etc., outlining not only what an independent Irish government could do in the New Ireland but also setting out the specific measures which could be taken here and now to ensure that the fabric of Irish life would remain as healthy and intact as possible under the present colonial and neo-colonial conditions that prevail in the partitioned states North and South.

It argues that since the publication of Éire Nua the party has expanded policy in a variety of fields. It also suggests that:

It is necessary however, to point out form the beginning that SF policy always distinguishes between what can be achieved within the limitations of the present governmental structure of this island, and the vigorous revolutionary policies which Republicans would advocate in a free New Ireland.

Interestingly the document starts by identifying ‘the question of ownership and exploitation [of Irish natural resources] in the interests of the Irish people. And it argues that the Proclamation of the Irish Republic in 1916 by asserting the “right of the people to the ownership of Ireland” in tandem with the Democratic Programme of the First Dáil Éireann, 1919 which declared:

…the nation’s sovereignty extends not only to all men and women of the nation, but to all its material possessions; the nation’s soil and all its resources, all the wealth and all the wealth-producing processes within the nation and with Pearse we re-affirm that all rights to private property must be subordinated to the public right and welfare’.

To this end the document argues that:

Sinn Féin stands not merely for the complete overthrow of English rule in Ireland but also for the setting up of a Democratic Socialist Republic. WE have outlined clearly what form this federated Republic would take in our Éire Nua programme and have incorporated the right of the Irish people to the natural resources of the country in the first point summary thus: “The wealth of Ireland belongs to the people of Ireland is theirs to be exploited and developed in their interests”.

It continues that ‘we reject “Western” liberal capitalism and the consumer society on one hand and the state capitalism of the “Eastern” bloc on the other. Our aim is to outline an alternative third way of life based on Irish traditions and values and adapted to the geographic and historic situation we find ourselves’.

And it outlines one caveat:

We also feel that what may suit in one particular sector of the economy, or even in one region of a New Ireland may not necessarily be the best solution for another. Thus while we emphasise the growth of co-operatives in agriculture and fishing matters, we advocate state management of most major sectors of the economy and the financial and banking institutions. Some industries lend themselves to independent ownerships, others to workers control, others still to development as state corporations. But the underlying principle in each case is that the rights, welfare and prosperity of the ordinary Irish citizen are paramount and have to be protected.

It argues that in the case of mining ‘because it concerns a fundamental natural resource – a national resource not owned by anybody until it is discovered and exploited… is quite unique and needs to be considered as such. For this reason we feel that the question of compensation, which would arise say if some land were to be nationalised for whatever purpose, does not apply’.

And it further argues for the establishment of the equivalent of a state Bord na Móna for mining exploration and research, which would also coordinate mining and energy development in the country and to maintain strict control on any multi-national companies that would be interested in developing any particular sectors of the wealth.

In this respect an attitude similar to the present policy of Norway would be adopted. Thus while the irish tax rate on profits form exploration at about 50% is rather similar to the profits tax imposed in Norway, Sinn Féin would also insist, as Norway does, that the state company have a share in the development and that a permanent royalty be paid where a successful strike was made.

Worth noting the emphasis on wind and tidal energy to generate electricity and ‘an intensification of development on our peat-lands’. 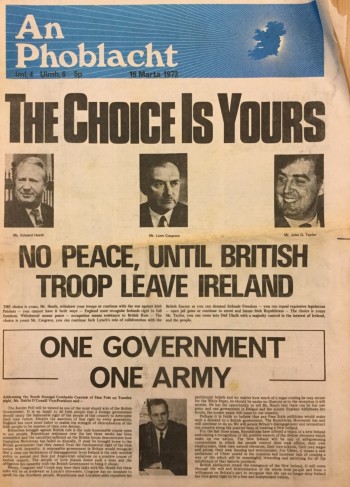 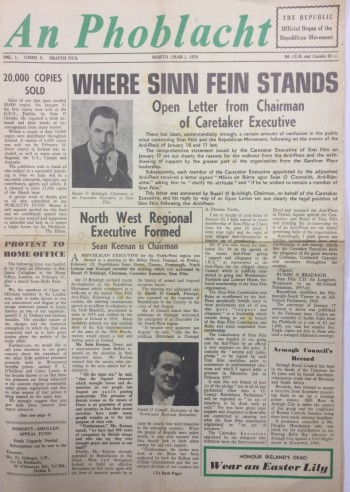 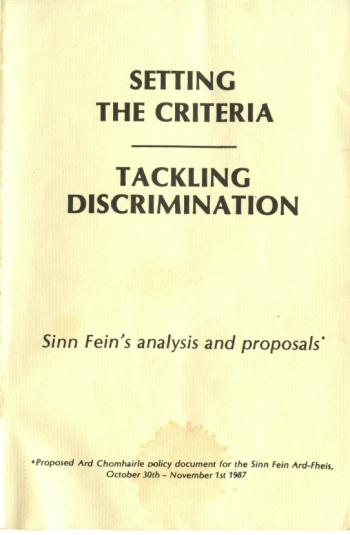