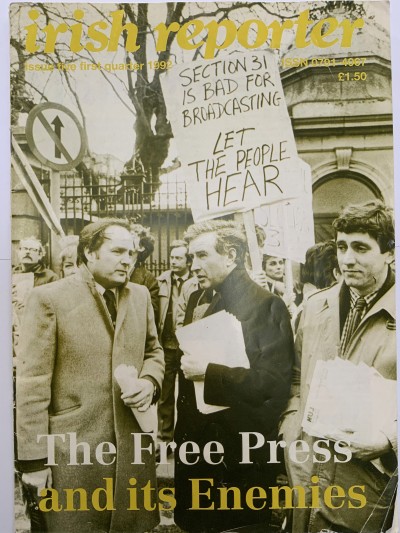 The Irish Reporter was a journal of discussion on political, social, cultural and historical questions, visual art and poetry, which was published from Dublin during the 1990s, on a co-operative and non-profit basis. It aimed to be progressive but open to diverse opinion on issues such as the national question in Ireland, globalisation, issues of class, gender, ethnicity and marginalisation, economics, human rights and ethics. Each edition had a different editor/guest editor.

While always a well-produced and comprehensive publication this is a particularly interesting edition which engages with Section 31, press coverage and related matters. The editorial notes:

For most of the past 20 years concern over freedom of speech, civil liberties and issues surrounding censorship in Ireland have focused almost exclusively on the effects of Section 31 of the Broadcasting Act, with its obvious impact on the free speech of members of certain organisations. There has been an almost self-congratulatory attitude at what some people see as a victory, in that censorship in the arts has almost ceased -though the film censor still watches film after film and orders his cuts to save us from ourselves, and the legislation that once allowed the wholesale banning of books is still there on the statute books, and is used.

Yet a culture of secrecy still pervades Irish society. The time has come to analyse and fight it because,among other reasons, the fight against the specific provisions of Section 31 has been lost. Possibly it lost because the arguments against it were too narrow.

The fight against Section 31 was lost when journalists and broadcasters in the NUJ and SIPTU took a case to the European Court and lost, effectively endmg any chance of a legal remedy. If politicians are unwilling to listen to arguments against the continued renewal of Section 31, then it is up to others to generate a debate and create a climate which will make it more difficult for politicians to renew Section 31 every year with nothing more than a nod. Information and news empowers people and allows them to take decisions that affect their lives. In this country, north and south, there exist measures, ranging from the Official Secrets Act, through the two broadcasting bans, to the use of libel, slander and contempt of court to ensure that secrecy and control of information prevail.

To successfully oppose Section 31 and the Hurd Ban in the North and Britain, the debate has to be broadened to take into account women’s right to abortion information, the right to public health information, the privatised censorship used by institutions such as the churches and commercial companies, the use of gagging writs and other legal devices to keep information from people, as well as the growing industry devoted to managing and distorting the news.

Censorship does not simply affect a few journalists or members of proscribed organisations, but everyone who is denied the information they need to live their lives to the full, from making family­ planning decisions to judging how to use a vote in an election. This is the way the debate must proceed. We hope this issue of Irish Reporter is a start to this discussion.

The contents is wide-ranging. Michael Foley writes about ‘The News Managers’, David Miller on ‘Selling Northern Ireland’. A special correspondent writes about ‘Section 31: The Strasbourg Decision and Beyond’. Luke Gibbons writes about ‘The Camel in the Koran: Rumour in Irish Politics’. Brendan Ryan looks at ‘Confusing the Citizens’. Marie McGonagle discusses ‘Fit to Print: The Law and a Free Press’. ‘Superior Gaze, Inferior News: Technology and Flow’ is written by Farrel Corcoran. Carmel Bedford considers ‘A Thousand Days of Censorship: Fiction, Fact and the Fatwa’. Finally Carol Coulter engages with ”’Protestants for a United Ireland” -another view’.

With such a comprehensive coverage it is probably worth taking one quote from the article on Section 31 which seems prescient at this remove:

For the future the only course can be in the political arena. Difficult as it has been, those opposed to Section 31 will now need to renew a campaign to convince politicians that the measure is an undemocratic and excessive interference – one which continues to distort coverage of the biggest and most important story in Ireland. 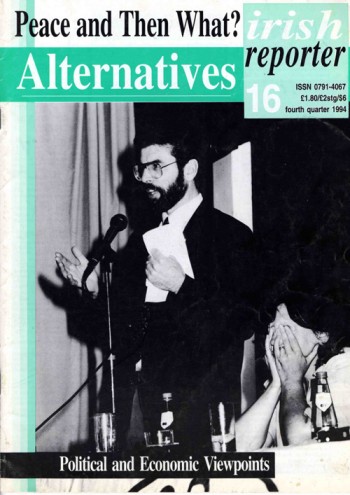 Irish Reporter in the archive 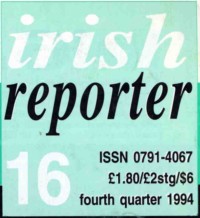 The Irish Reporter was a journal of discussion on political, social, cultural and historical questions, visual art and poetry, which was published from Dublin during the 1990s, on a co-operative and non-profit basis. It aimed to be progressive but open to diverse opinion on issues such as the nat…

See Irish Reporter in the archive