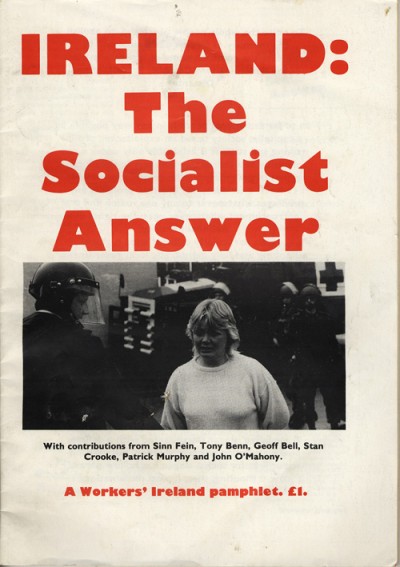 This is not the place, nor is there the time, to chart the unusual history of the groups centred on Sean Matgamna  - himself from County Clare. But here is a document “Ireland: The Socialist Answer” under the Socialist Organiser imprint from June 1989 which seeks to bring their analysis to bear on ‘Ireland’, or more particularly ‘Northern Ireland’. Those of us who have watched the Alliance for Workers’ Liberty  chart its idiosyncratic path in recent years (and those who most likely have seen the same with its predecessors) will recognise some of the same tendency to avoid the usual approaches to these issues. That this may not be an unalloyed good goes almost without saying.

Because of its length this will be posted across two weeks and in two or four parts - for those of you on dial-up who may find downloading very large files too time consuming. Think of it as a beautiful part-work, as the Mail on Sunday tends to put it - although, granted, they’re hardly in the business of disseminating left-wing political material. There are some oddities of the internal organisation of the document so that articles start on the back page and continue on an inside page. To be certain of where you are it is probably best to consult the contents on page 3.

To be honest - and as ever - there is much to like and much not to in this document. It has interesting essays on the various positions of left groups in Ireland and outside. Some of the discussions now seem archaic - many of the formations have either dissolved or moved onto entirely new positions. The overall context has been altered utterly by two decades of history. And yet this has to be one of the most comprehensive, if flawed, attempts to come to terms with the issue of the North.

If my hackles rise at the term ‘Catholic revolt’ used from the contents page, or indeed even the concept of a socialist ‘answer’ as if there is a simple reductionist solution rather than a multi-layered evolutionary process, that is not to say that there is much to think about, even if only in the manner in which the analysis is so subjective.

All that said it is also worth recalling what John O’Sullivan once wrote, amongst other prescient comments, when he noted that:

O’Mahony’s [Matgamna’s] theoretical journal, Workers Liberty, is currently the most stimulating read on the Left and makes one wish that such a keen intelligence could be freed from the constraints of short term factional and organisational appetites. However, the logic of total immersion in domestic Labour Party matters will soon reduce political discussion to Militant bashing, so read it while you can, as the journal is unlikely to maintain its present level for long.

Finally on a slightly different issue, just what was it with further left journals in the UK and Ireland and the various iterations of Gill sans serif? Marxism Today used it, this used it, some WP material used it and others have used it. Yes, I know Gill was socialistically inclined, but even so… When everything starts to look like MT then surely a bit of differentiation is no harm?

See Alliance for Workers' Liberty in the archive