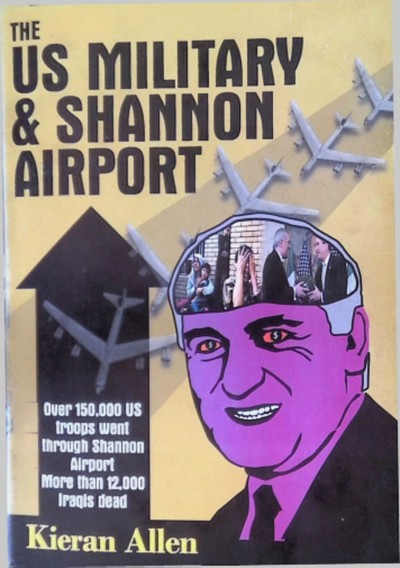 This document joins the other IAWM publication already submitted to the Archive. Across 42 printed pages the document is divided into chapters. An overview of the situation is offered, then examples of direct action against the US presence at Shannon. Then ramifications of that presence are outlined including ‘restrictions on the right to free speech’. This notes that:

On February 15 2003, over one hundred thousand people marched inDublin against the war on Iraq and the presence of US troops at Shannon airport. It was the largest ever protest in recent Irish history – and it scared the political elite. Ever since then, there has been a concerted campaign to restrict publicity on details about protests. The aim is to cut back on the numbers attending.

In Galway, the local city council introduced a bye-law to ban the distribution of leaflets. It also stated that no person shall ‘hold or address a public meeting or religious service on recreational open space involving not less than 100 people except with the written permission of the Council’. Groupings that wished to protest about the policies of Galway City Council would first have to obtain written permission from said council! Bizarrely, the bye law also restricted swimming, kite flyingand skate boarding.

Unfortunately, however, restrictions on free speech in Dublin got through. In the run up to the Bush visit, Dublin City Council again invoked a bye law to restrict postering. They ruled that no posters could be erected in Dublin unless prior approval was obtained from the council or they were relating to an official election campaign.

Bertie Ahern has claimed that Shannon has become a ‘dead issue . The reason, apparently, is that sovereignty has returned to Iraq and the US is only assisting a friendly government. Moreover, this handover of power, which took place on June 28 2004, has the sanction of the United Nations. According to this version of events, the US is no longer fighting an imperial war so there is no problem with their use of Shannon airport. This, however, is a fiction because no real handover of power has taken place in Iraq. It is a puppet state of the US.

The document also outlines the ‘Cost of the War’ first and foremost on Iraqi’s themselves.

This is the real face of the suffering that Fianna Fail and PD politicians do not speak of. The lies about weapons of mass destruction have fallen apart. But they still pretend that the war was a good thing because it removed Saddam Hussein. But Saddam Hussein only came to power with the help of the CIA – and he was actively supported when he was their ally in a war against Iran. Corporate America has no problem with tyrants and bullies – it actively supports dictators in Pakistan or Uzbekistan, for example. The only condition, though, is that these thugs must be ‘our thugs’!

The document concludes by detailing how those reading it can help. This includes:

Information is power. Distribute the fact sheet on Shannon. There is a media blackout on what is happening at Shannon — and the political establishment want to keep it like this. Gather support for the national petition to stop Irish facilities being used for foreign wars. Ireland is officially a neutral country – but the government continually makes a mockery of this tradition. It gets away with this, because there is a loophole in the constitution that allows the Dail to give its assent to war.

Make your opposition visible. There is no business as usual! The Irish Anti-War Movement has produced thousands of posters, T-shirts and badges to make our opposition to war visible. Get the posters up in your local cafe, college, or shops. And wear the badges!

Many political parties have spoken on anti-war platforms — and the Irish Anti-War Movement has been glad of their support. But we are coming to a crucial juncture in Irish politics in the coming year or two. Fianna Fail and the PDs are deeply unpopular and may be thrown out of office. Now is the time for all the parties that spoke at anti-war events to make it clear that they will not support any government that permits US troops to remain at Shannon. 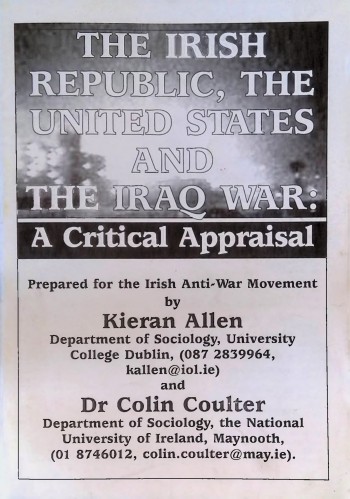 The Irish Republic, The United States and The Iraq War: A Critical… (2003)

Irish Anti-War Movement in the archive