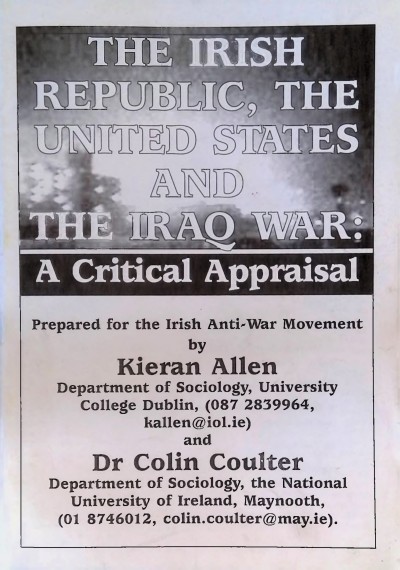 Many thanks to the person who scanned and forwarded this to the Archive. It is of considerable significance as the first document from the Irish Anti-War Movement in the Archive. The IAWM was one of the organisations responsible for one of the largest marches held in Ireland in recent times, in February 2003, where over 100,000 people marched against the Iraq War.

This pamphlet by Kieran Allen and Dr. Colin Coulter offers an excoriating analysis of the moves to war and the response by the Irish state to that and its relationship with the United States. It is divided into ten chapters, including ‘Collusion and Cover-Up at Shannon’, ‘Official Explanations for Allowing the US Military to Use Shannon’, ‘The Meanings of Neutrality’ and ‘Absolving the Official Conscience – the Conduct of the War and Its Aftermath’.

In the Irish Republic, in contrast, the realisation that the war on Iraq was spun out of half truths and outright lies has yet to produce a sustained political debate. While Irish journalists have covered extensively the unravelling of the case for war, they have done so in a manner that suggests that it is merely an item of foreign news that has little bearing upon the political life of the twenty six counties. In reality, however, the lies that have poured out of the imperial centres of Washington and London have a significance that is rather closer to home. The ongoing war in Iraq is, after all, one in which the Irish Republic played a substantial ideological and material role. In spite of its public equivocation, the Irish government actually supported the illegal military assault upon the people of Iraq both in principle – that principle being the right of the United States to act however the hell it likes – and in practice – by ignoring the will of the Irish people and allowing tens of thousands of American troops to pass through Shannon airport. The escalating revelations concerning the fabrication of evidence of weapons of mass destruction in Iraq exposes Irish foreign policy as even more iniquitous than we had already suspected. In the last few months, the Irish government has not merely supported an illegal war but an illegal war that was manufactured out of barefaced lies.

It was against this particular backdrop that the steering committee of the Irish Anti- War Movement convened in early June to discuss how events had unfolded over the previous few weeks. It was agreed that the IAWM should seek to spark a public debate that would hopefully ensure that the Irish government would at last be called to account for the appalling manner in which it had handled the crisis over Iraq. One of the means towards this particular end that was devised was the compilation of a dossier that would chronicle the evasions, ambivalence and hypocrisy that have become the hallmark of contemporary Irish foreign policy. Although the dossier was originally conceived as a fairly concise document, the body of evidence damning the Irish government turned out to be so substantial that it quickly grew and eventually weighed in at a hefty 15.000 words.

It is our view that most Irish people aspire to play an independent and progressive role in the world. The tens of thousands who turned out on February 15th this year provide as compelling proof of this as one could imagine. The authors of a genuinely antiimperialist Irish foreign policy will not course be the political class or the corporate media but rather the ordinary people living on this island. If Ireland is to play a part in the creation of a just and sustainable world we need a popular, vibrant and diverse movement implacably opposed to imperialism and war. It is hoped that the production of this pamphlet will make a small contribution to the life of that movement.

The various sections of the pamphlet analyse the issue in great detail, but of particular note is the Appendix with Summary of Key Recommendations: 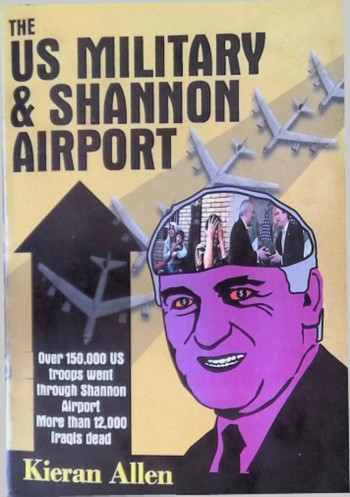 Irish Anti-War Movement in the archive