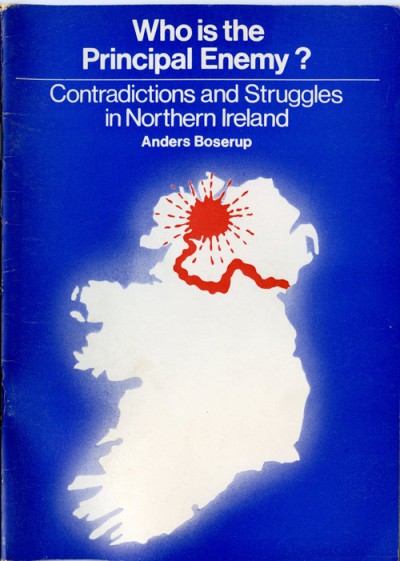 This document was issued by the British Independent Labour Party  in 1972. As was noted here…

The ILP was at that point on the verge of entering the British Labour Party. Interestingly it states at the beginning of the document that ‘this pamphlet is not a statement of ILP policy on Ireland’.

The pamphlet is divided into various subject headings, from Partition, The Orange System, Forms of the Political Struggle and so on.

The Introduction notes that the essay was written in 1971 ‘before internment and the escalation of violence which came with it’. It continues:

Overnight everything seemed to have changed: the scale of events, the lines of battle and the political issues and priorities. Until then it had been possible (by stretching things a little) interpret the conflict as a confrontation between Catholics and Protestants, with the British Army in an essentially mediating role. Now, it seemed, the mask had finally been dropped: the BA was engaged in a one-sided combat against Republicans and left-wing radicals.

But the author writes that although somewhat outdated ‘I do not think that an analysis loses any of its pertinence in so short a time. The very diversity of the struggles and the rapidity within which they alternate are evidence, if any had been needed, that the importance of these struggles is only incidental. They are only the outward form of the underlying contradictions.’

The author argues that ‘the dominant theory of the Irish (Catholic) left and of socialist groups outside Ireland… [is that] the fundamental contradiction opposes imperialist domination on the one hand and, and on the other the struggles for national liberation and socialism’.

As I try to show, the strategy of ‘national liberation’ which the left is pursuing is based on a faulty analysis and leads absolutely nowhere. It portrays the windmills of British imperialism as a mighty army and overlooks the real enemy. In so doing, far from enriching the revolutionary experience of the working class and preparing the ground for the more meaningful struggles of the future, it is trapping the working class evermore firmly in its sectarian ideologies. Suitably romanticised, the bloody and pointless battle soy these years will probably one day take their place alongside the trophies of 1690 and 1916 to fulfil their only possible role: to cripple the consciousness of future generations in Ireland.

It is this tone and argument which permeates the leaflet. Of particular interest are the arguments made on pp22-23 on Nationalism and Socialism which essentially reframe (and consciously so) those made by the British & Irish Communist Organisation. And it is clear that the ultimate conclusion is one which, as the author states, ‘[an] affirmation that Northern Irish Protestants constitute a separate national entity with a right to refuse incorporation in the Republic..’ pp28.

The Independent Labour Party (ILP) was a socialist party in the UK, established in 1893. It was affiliated to the British Labour Party from 1906 to 1932, when it disaffiliated. (It also left the Labour and Socialist International to participate in the formation of International Revolutionary Marxist…