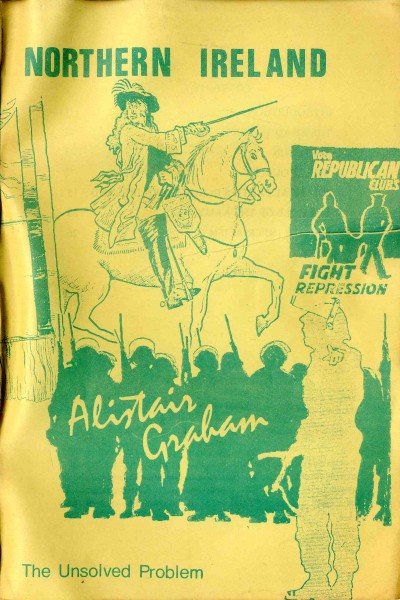 This document states that:

‘Nothern Ireland, The Unsolved Problem’ by Alistair Graham provides a descriptive introduction to the present risks in the province. Its purpose is to supply background information on the situation. It is not a statement of the collective view of the Independent Labour Party.

The Introduction argues that:

However it is hoped that any views expressed in it will be shared by many on the left who wish for a peaceful, and progressive, solution to the conflict; and that it will help towards an understanding of the complexity of the problem. There are no clear-cut answers to what has been happening in Northern Ireland. Confused or simplistic analysis is no less wrong when it is cloaked in Marxist jargon.

The Provisionals split away from the official wing of the republican movement at the end of 1969. Ostensibly, the cause of the split was disagreement over the Socialist, and increasingly Marxist, philosophy being adopted by the republican movement, together with its abandonment of physical force tactics in favour of political involvement. But, in fact, the split has its origins within Fianna Fáil (which was at the time Ireland’s governing party).

Alarmed at the direction in which SF (the republican party) was moving during the sixties, elements within FF made contact with republicans, particularly in the Six Counties. An offer of money and arms was made, on doncidtion that activity was concentrated in the North, and that there was an abandonment of any political activity. As a result, the Provisional ‘Army Council’ was organised, its first press statement appearing on December 29, 1969. In January 1970, at Sinn Féin’s annual conference, Provisional supporters walked out and the break was complete.

The document dismisses approaches grounded in ‘British Imperialism’ as a means of explaining the conflict though it notes:

This is not to deny the continuing economic control exercised by British capitalism in Ireland, North and South, or the growing influence of British and multinational firms, but this hardly necessitates direct political or military control.

And it sets out a series of demands which include the following;

A Bill of Rights, on the lines suggested by the Northern Ireland Civil Rights Association A reconstituted police force, to replace the R.U.C. To eradicate the sectarian image of the police A drastic reappraisal of the Army’s role in NI, and its withdrawal from patrolling duties which have provoked much of the violence.

These demands are quite similar to those of Official Sinn Féin at that time. It would be interesting to assess how influential this document and those from other formations both external and internal to it were on Labour Party policy during this period.