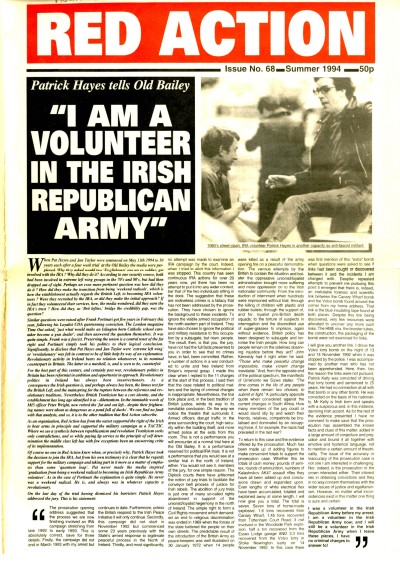 Recently Red Action posted much of their archive online,  and this can be accessed here. That includes the above document, but since this was already acquired for the Archive and scanned in it seemed appropriate to include at least one example of the output of the formation (and as it happens we’ve been promised some more documents in the future with a specifically Irish orientation).

Red Action  appeared in 1981 when members were expelled from the Socialist Workers Party for squadist activities. Consequently in outlook it positioned itself as an self-avowedly forceful response to the threat of fascism and racism as well as cleaving to a strongly working class centred position. In the 1980s it joined the RCP led Red Front (as can be seen in this document from the RCP in the Archive). Interestingly it transitioned into community based politics in the late 1990s and on into the 2000s, and former members were heavily involved in the Independent Working Class Association  which went on to win council seats and only relatively recently became inoperative.

This document is of particular interest because while it demonstrates all the political approaches outlined above it furthermore relates to one key aspect of Red Action, that being an strong identification with Irish Republicanism - it is notable that in other documents available on the Red Action site Thomas ‘Ta’ Power of the IRSP,  later assassinated by the IPLO, is quoted. The cover story notes that Patrick Hayes, an English born member of a PIRA active service unit, imprisoned for a short bombing campaign in England in the early 1990s, was a former long standing member of Red Action (for more on this see this  from the UK Independent which gives a subjective but interesting overview).

As the editorial accompanying Haye’s statement at the Old Bailey on his imprisonment notes:

As an organisation, Red Action has from the outset supported the right of the Irish to bear arms in principle and supported the military campaign as a TACTIC. Where we see a synthesis between republicanism and revolution Trotskyism seeks only contradictions, and so while paying lip service to the principle of self-determination the middle class left has with a few exceptions been an unswerving critic of its implementation.

Of course no one in Red Action knew when, or precisely why, Patrick Hayes took the decision to join the IRA, but from his own testimony it is clear that he regards support for the military campaign and taking part in it more a matter of emphasis than some ‘quantum leap’. Pat never made the media inspired ‘graduation from being a weekend radical to becoming an IRA volunteer’. As in the case of Portinari [a Loyalist gunrunner] the explanation is quite simple. He never was a weekend radical. He is, and always was in whatever capacity a revolutionary.

In some respects these quotes also offer an insight into other aspects of Red Action, namely a strongly critical view of other contemporary further left formations, particularly those with a Trotskyist orientation - albeit it itself came from a Trotskyist heritage. It also held a strongly working class position that saw itself as deeply at odds with the middle class both in class and political forms or in its analysis that other further left formations were distorted by that class.

This combative stance is exemplified by a number of articles in the document on Trotskyism, including ‘Trotskyism’ with No Illusions which lambastes both the British Labour Party and ‘the Trotskyite Left [who] without exception line up with the bureaucracy in defence of the status quo, [whereas] we stand with the working class against the bureaucracy’ and within the working class; with the anti-racists against the racists.’. There is also an article which takes as its starting point the then recently published final edition of the SWP’s Tony Cliff’s final volume of his biography of Trotsky which is sub-titled ‘The Real History of the Fourth International’.

The emphasis on Irish Republicanism is evidenced throughout the text with highly critical articles on the Troops Out movement (and which is also in passing highly critical of the RCP) and a page devoted to “Dispatches from a war zone” and which in this instance deals with informers and pro-British agents.

There’s also a piece under the heading ‘Beyond the Pale’ for Red Action in Ireland, complete with PO Box. The accompanying article, ‘Guns, Drugs & The Community’, outlines the history of the development of the drugs issue in working class Dublin and how Concerned Parents Against Drugs (CPAD) became pivotal in ‘the fight against drugs’. The article notes that ‘The Left’s attitude to this genuine instance of working class people taking control of their lives has also been pathetic. From the SWM’s denunciation of CPAD as vigilantes, to the serious serious damage done to the anti-drugs campaign by the Workers’ Party’s allegations of addicts being kept against their will in France, the left in Dublin has been a hindrance to the CPAD. Sinn Féin are the only group on the left who can claim any credibility from the fight against the drug pushers. Contrary to the allegations of SF infiltration of CPAD, the SF activists actually belonged to the working class communities under threat and had every right ton involve themselves in the fight against drugs’.

In the latter there is the following reference: CPAD wants addicts to be sent to treatment centres where they might actually have a chance to get off drugs. CPAD have in the past sent addicts to the Le Patriarche centre in France but a Workers Party created controversy and lack of resources meant this could not be continued’. 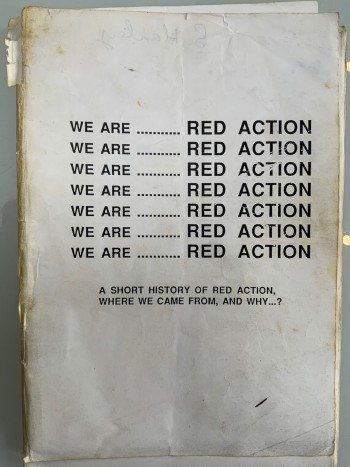 Red Action [Britain] in the archive

Red Action is a small British leftist political group formed in 1981. It became known for violently confronting racist and fascist opponents on the streets, and for supporting Anti-Fascist Action. In 1995, The Independent estimated that it had between 20 and 30 branches with 10-15 activists in each,…

See Red Action in the archive