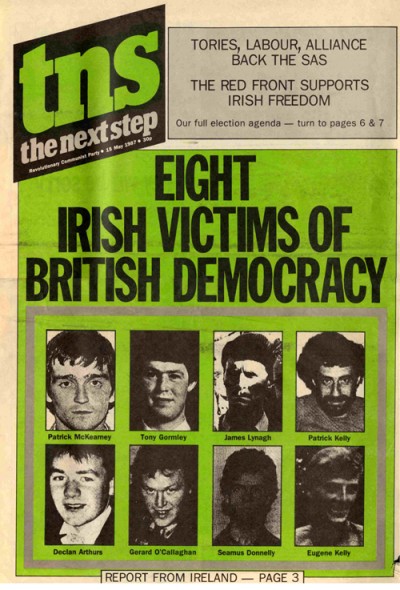 As the RCP it combined an overtly Leninist line with a strong emphasis on social liberalism and stances on a variety of issues which caused considerable controversy. Like the RCT and the RCG before it, the RCP was notable for its unswerving identification with Sinn Féin and the IRA and this document has a front page story about the 8 IRA volunteers shot dead at Loughgall that year as part of an ASU commanded by Jim Lynagh. The editorial in the paper suggests:

The massacre at Loughgall was a fitting last entry in the record of the second Thatcher government. It captured the brutality and sheer bloody mindedness with which the Tories have cracked down on those who oppose their will.

The editorial maps this onto the then upcoming election, arguing that:

In the general election, we are campaigning for the candidates supporting The Red Front - a platform for working class unity (see pages 6 and 7). The Red Front is a focus for all those who demand the right to fight for the working class. It upholds our right to struggle for a decent life and for freedom from oppression. The events at Loughgall should convince us of the crying need to unite left-wing people behind the banner of The Red Front. The alternative is to support a party which unites with Thatcher in congratulating those who will kill to crush resistance to the rule of tyranny.

Inside the paper there is considerable coverage of Loughgall and the SAS shoot-to-kill policy. In a full page article on the events it states:

Nobody denies that the IRA men went out to attack the Loughgall RUC base. But the thousands of Irish men and women who marched against the killings insist that the republicans had the right to do so.

It is worth noting that there is no examination of the political position of parties in Ireland.

Other than that there are a range of articles on a varied range of topics from South Africa to AIDS to issues regarding local government in the UK. The main focus, however, is on the general election. The Red Front fielded 14 candidates, and as an article in the paper notes:

It costs £500 just to register a candidate, and then there’s the one for posters, manifestos, phone bills, meeting halls, transport, campaign offices.

In sum then a professionally produced, somewhat varied document very much of its time.

See The Next Step in the archive