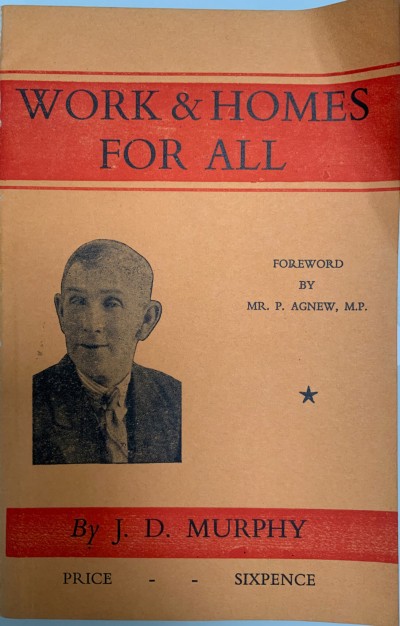 This is a unique addition to the Archive. A pamphlet issued by the North Derry Labour Party from 1944. The North Derry Labour Party appears to have been a section of the Northern Ireland Labour Party, to judge from a report in the Irish Democrat from April 1948 which notes that at the Northern Ireland Labour party conference ‘a resolution of the NDLP calling for Britain and Ireland to pursue a genuinely independent home and foreign policy by developing their own resources was passed despite the oppositoin of the Executive’. Any further information on the NDLP would be very welcome.

There is a Foreword by Patrick Agnew, MP for South Armagh. Although a nationalist, he was inclined to labour politics. In 1932 he established the Armagh Employed and Unemployed Association. In 1933 he set up a branch of the Northern Ireland Labour Party. He was elected to the parliament at Stormont in 1938 where he was an MP until 1945.

which argues that after twenty years in power ‘the Government of Northern Ireland stands condemned by its neglect of the needs of the workers, particularly in relation to housing.’ He notes that ‘from my direct experience I find that[the efforts of the government] are directed towards pleasing private enterprise regarding housing and land regardless of the ones of the workers’. And he states ‘The Unionist Party cannot solve the housing problem’.

‘The Labour Party with its practical knowledge of the building industry, presents in this pamphlet a policy which will give the workers of Northern Ireland homes fit to live in.’ And he argues ‘The Labour Party’s policy of state control is the only way to eliminate excessive land costs and the evil of speculative building’.

The document – perhaps inevitably, does not mention religion or sectarian aspects of the political dispensation whatsoever. The focus is on the issue of housing in particular and the necessity for modern buildings built by the state and the need to demolish slum dwellings. It has charts and photographs of unfit housing focusing on North Antrim and North Derry. It also shows interiors of modern housing including ‘Portal temporary bungalows’. Notably it argues that ‘the temporary houses constructed to rehouse the people should be nationally owned so that no compensation will be payable when they are scrapped’.

It will be a fight for the whole future of Northern Ireland and its people; to decide whether or not we are to keep in line with the great Labour movement in Britain and political development all over Europe. The people want to see extension of democracy throughout all their institutions and the end of Tory privilege and snobbery. They want to take part in the administration of their own country and the organisation of the era own lives. The people want jobs for all, good wages and short hours…. For many years the people have shown, in the conduct of their Trade Unions and Cooperative organisations, that they have aggregator abilities for government and administration than Nationalist, Tories, or so-called Independents and Moderates.

We all in NI have our responsibility. We must ensure that a strong, united Labour movement is forged which will rally to its ranks all that is best in the country, a Labour movement that will e strong enough to defeat the Tories, overcome the problems of the future, and under the banner of the Labour Party lead the people to future happiness with work and homes for all.