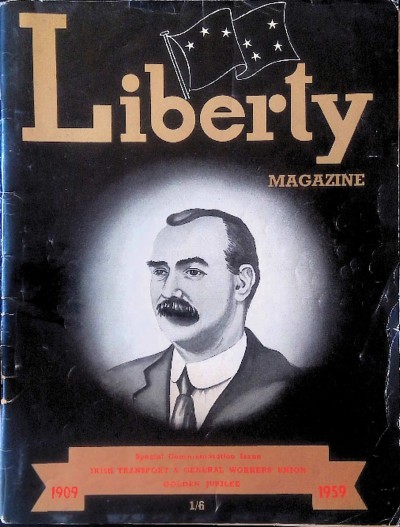 Many thanks to the person who scanned and forwarded this to the Archive. This is a very important addition to the Archive and we are particularly grateful for the opportunity to post it up. This edition of Liberty Magazine was issued on the Golden Jubilee of the ITGWU in 1959. In the message from the General President, John Conroy.

I DESIRE in this special issue of “ Liberty,” published to commemorate the Union’s Golden Jubilee, to congratulate every member of the Union, north, south, east and west, on the contribution they are making in upholding the proud name and glorious history of the Irish Transport and General Workers’ Union. The achievements of the Union during the fifty years of its existence, just the same as its successes to-day, were only possible because of the loyalty and the sacrifices of the rank and file of the membership. Our future successes likewise depend on a loyal, informed and intelligent rank and file membership.

In the years since its establishment the Union has, because of the democratic principles under which it operates, its fighting spirit and the outstanding service given to its members, retained the confidence and the respect of many thousands of workers throughout the 32 Counties of Ireland.

We must retain these essential features of our Union.

We must never fail to impress on the young members their obligation to maintain the tradition of service to the members; how important to the future well-being of the Union are good and well-run Section Committees, good Section Collectors, Branch Committees and other responsible Management organisms within the Union.

We have every right to celebrate joyfully the Union’s Golden Jubilee and to feel justly proud of our Union’s past achievements. Let us be sure that those who follow us will be proud of the achievements of the Irish Transport and General Workers’ Union of our day and that we of this generation record in history some outstanding advances for the wage earners and the working-class of Ireland.

There is a significant amount of content, far too much to outline here other than to point at the numerous pieces including ‘Headlines in 1913’, ‘The Workers Army that Inspired a Nation’, ‘Munster’s Glorious Past in Worker’s Emancipation’, ‘The Great Ulster Problem’ and ‘Connolly-A Reminder’. There’s also a Special Supplement that includes pieces on ‘The First Fifty Years of O.B.U’ and profiles of various ITGWU founders and members. There’s also a piece on ‘The Right to Picket’. 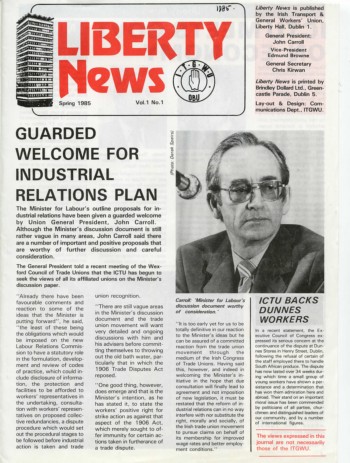 Irish Transport and General Workers' Union in the archive

The Irish Transport and General Workers’ Union (ITGWU) was founded in 1909, by James Larkin.…

See Irish Transport and General Workers' Union in the archive

See Liberty Magazine in the archive