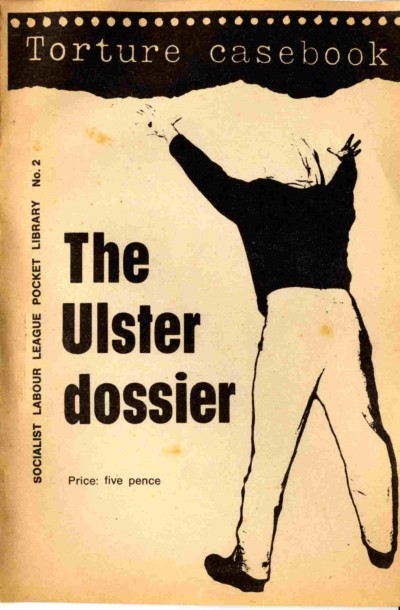 This document was produced by the Socialist Labour League, later the Workers Revolutionary Party. As noted previously:

The WRP itself was one of the more controversial further left formations in the UK,  but it’s important to note the direct connection with Ireland in the shape of its founder, Gerry Healy, who haled from Galway (indeed an interesting subject for further research might well the be influence of Irish born individuals on the shape of the UK further left and just why quite a number achieved some prominence). The Left Archive already has a piece of documentation from the WRP itself  and the WRP linked Workers League  and an interesting analysis critiquing the involvement of the SLL/WRP in Irish Marxism from the League for a Workers’ Republic.

This pamphlet compiles reports of torture by the British Army, the Ulster Defence Regiment and the RUC in Northern Ireland at an early point in the conflict. Three ‘casebooks’ are presented detailing ‘torturing and brainwashing’ It lists 22 separate forms of torture used and quotes one internee as being ‘glad to see jail again’ after interrogations and beatings.

The book outlines the SLL demands for Ireland, which include the removal of the then Tory Government in London, an immediate and ‘unconditional’ withdrawal by British troops, the repeal of the Special Powers Act, the removal of Stormont and the unification of Ireland.

It also includes a ‘Charter of Basic Rights’ which were agreed upon at the All Trade Unions Alliance, an alliance that was wholly organised and controlled by the SSL. The rights enunciated included ‘The right of every worker to a job’, ‘the democratic right to strike and organise’, ‘the right of the working class to retain the gains they have made’, ‘the right to a higher standard of living’, ‘the right to welfare benefits’, ‘the right to decent housing’ and the ‘right to decide on the Common Market’.

Stephen Jones writes at the start of the pamphlet in ‘An appeal to British Workers’ that:

[in Ulster] 240 Irish men - mainly workers - are incarcerated under the Ulster Special Powers Act. These people are deprived entirely of all Civil Rights. They have no right to trial, they are not even charged. They could be locked up for ever without appeal. Their family have no right to see them or be told of there whereabouts. But the situation is even worse than this. The utterly defenceless internees have also been subject to systematic and prolonged torture

The battle for Ulster must begin in the British labour movement and working class; which is the only force capable of bringing this government down. It is therefore essential to examine the role of the leaders of the LP on the Irish question.

And he also suggests that:

What is happening now in N Ireland could happen tomorrow in Britain. There has already been allusions by Tory Mps to similar situations developing in Britain’s main industrial centres. We repeat: Imperialist oppression in N Ireland is fed through roots embedded in Westminster. Those roots must be cut at Westminster by the British working class.

Interestingly there is no analysis of the political forces at work in Northern Ireland.