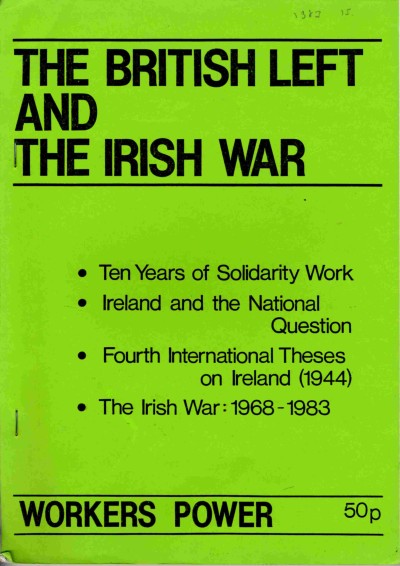 This is an interesting document not least because it dovetails with the Irish Workers Group analysis of the Socialist Workers Movement  which was posted up last year. And like that analysis it is highly critical of the SWP. Like many groups on the British left the genesis of Workers Power  lies in the International Socialists as the Left Faction in the early 1970s. The details of their divergence from the IS is charted on this wiki page , and their theoretical innovations are of some interest as is their championing a Fifth International, but it is telling that a component of that was the orientation of the IS towards the events in Ireland during the period, and in particular the relationship to the Provisional IRA.

In fact Workers Power, from its fotmation as the Workers Power Group in 1974 was characterised by an unflinching identification with PIRA and armed struggle in the North, indeed subsequent to the IRA cessations it has been sharply critical of the Good Friday/Belfast Agreement.

This document is almost 70 pages long and contains five essays, Ireland, The National Question and the International Socialists, Ten Years of Solidarity Work - The Troops out Movement, Sectarians Fill the Vacuum - The Irish Freedom Movement, Fourth International Theses on Ireland (1944) and The Irish War (1968 − 1983). Each is deserving of an analysis in and of themselves, but it is perhaps best given time constraints to simply consider the Preface.

Written at a time when the fortunes of Republicanism appeared to wane in the aftermath of the Hunger Strikes it notes:

In the wake of the defat of the 1980/81 hunger strikes… the national struggle in Ireland has, at the time of writing, profoundly ebbed. The IRA/INLA can stills trek symbolic targets in Britain (eg. The Household Cavalry) or units can still prove a match of the British troops on the streets of Northern Ireland’s cities. Yet, once again, the masses are off the streets.

This is our purpose in producing this pamphlet. The material has been assembled with the aim of laying the political basis for solidarity work in Britain. A detailed history of national oppression in Ireland is not our main concern here, but material on this is presented in the first document and in the archive piece from 1944. We assume that most people who read this will accept that national oppression exists. This pamphlet aims to show what conclusions flow, or should flow, from this realisation.

Interestingly it notes that the ‘major piece’…Ireland, The National Question and the International Socialists deals with the ‘failure of the centrist left (in particular IS, now the Socialist Workers Party (SWP)) after the Aldershot bombings’ and how this ‘was the initial inspiration behind the formation of the Left Faction’ which would go on to form Workers Power.

It also notes that the archive piece is included ‘not because we agree with everything in it, but because it is not widely available, and has not (to our knowledge) been reprinted. The authorship is unknown, but the ‘Irish Trotskyists’ responsible, working in realtime isolation during war time, have produced an early attempt at explaining the National Question in Ireland, using Trotksy’s theory of permanent revolution as a guide’.

It notes that ‘Workers Power does not regard polemic alone to be sufficient. Points of common activity can and must be found. The left Faction urged IS to help launch Troops out work in the Labour movement. Workers Power has responded to events such as the hunger strikes by throwing the organisation into taking up the anti-imperialist cause within the working class’ 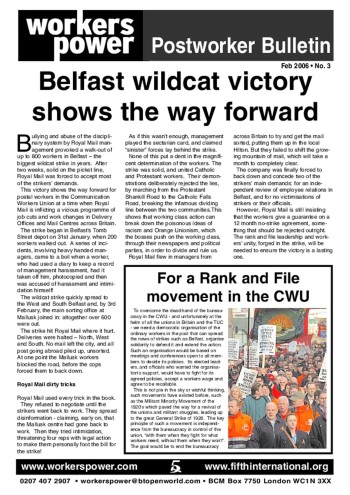 Workers Power [UK] in the archive

Workers’ Power was a Trotskyist group, which was the British section of the League for the Fifth International. The group originated in the International Socialists (IS) as the Left Faction.…