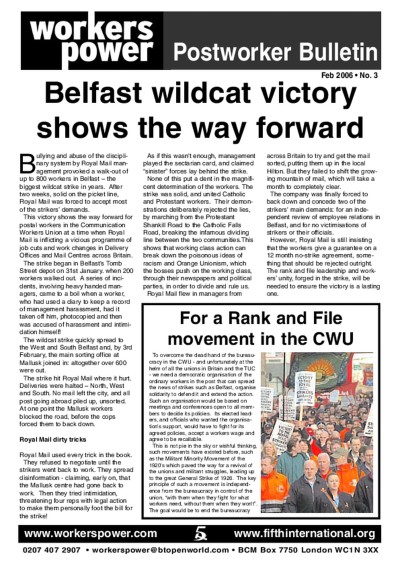 A very slightly unusual document from Workers Power – the UK based Trotskyist political grouping extant from 1974 to 2015. This one is aimed at Communications Workers Union members in Belfast who had just staged a strike at the Royal Mail in that city. The piece outlines the dispute and argues that:

As if this wasn’t enough, management played the sectarian card, and claimed “sinister” forces lay behind the strike. None of this put a dent in the magnificent determination of the workers. The strike was solid, and united Catholic and Protestant workers. Their demonstrations deliberately rejected the lies, by marching from the Protestant Shankill Road to the Catholic Falls Road, breaking the infamous dividing line between the two communities.This shows that working class action can break down the poisonous ideas of racism and Orange Unionism, which the bosses push on the working class, through their newspapers and political parties, in order to divide and rule us.

It also argues for ‘a Rank and File movement in the CWU’.

To overcome the dead hand of the bureaucracy in the CWU – and unfortunately at the helm of all the unions in Britain and the TUC – we need a democratic organisation of the ordinary workers in the post that can spread the news of strikes such as Belfast, organise solidarity to defend it and extend the action.

Such an organisation would be based on meetings and conferences open to all members to decide its policies. Its elected leaders, and officials who wanted the organisation’s support, would have to fight for its agreed policies, accept a workers wage and agree to be recallable.

It calls for a national strike but also argues for a New Workers Party in Britain.

Our immediate goal should a national strike against the cuts and privatisation.

But a rank and file movement needs to have a bigger political. strategy too. We should aim to split from labour and support the Campaign for a New Workers Party Conference this month. We should build a working class movement against privatisation with other public sector unions, community organisations, and youth. We should fight for the transformation of the entire sector we work in, nationalising the other private postal operators without compensation and placing the communications sector – post, telecoms, and internet – under the control of the working class, running it for need not profit..

Such a rank and file movement could spearhead a revival of the working class movement in Britain, and help bulid a revolutionary party that could lead the working class in the struggle for the overthrow of capitalism, and for a new socialist society. 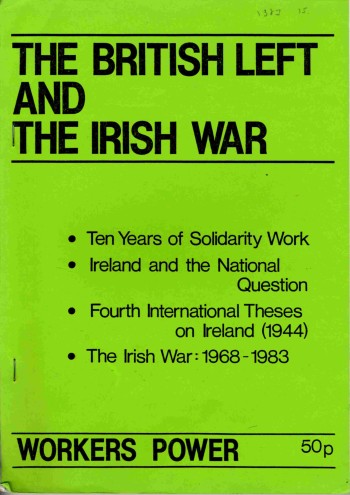 Workers Power [UK] in the archive

Workers’ Power was a Trotskyist group, which was the British section of the League for the Fifth International. The group originated in the International Socialists (IS) as the Left Faction.…

Postworker Bulletin was produced by Workers’ Power in the 2000s.…

See Postworker Bulletin in the archive