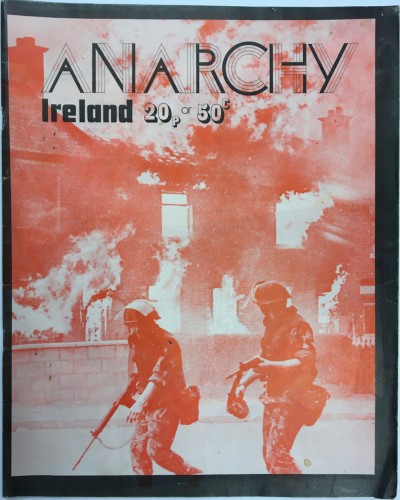 Many thanks to the person who forwarded this to the Archive (this is also, as we found out after scanning, available here on the irishanarchisthistory website ).

Anarchy was the publication of Freedom House press in the UK, and was edited by Colin Ward. As noted on wiki:

Anarchy was an anarchist monthly magazine produced in London from March 1961 until December 1970. It was published by Freedom Press and edited by its founder, Colin Ward with cover art on many issues by Rufus Segar. The magazine included articles on anarchism and reflections on current events from an anarchist perspective, e.g. workers control, criminology, squatting.

A second series of Anarchy was published into the 1980s with an editorship that included Chris Broad and Phil Ruff.

Freedom Press, founded in 1886 in part due to a split with Fabianism, prints anarchist related material, including until 2014 the Freedom newspaper.

This special edition published in 1971 contains an eclectic range of articles including ones on: The Belfast Police Mutiny, 1907; James Connolly, Irish Syndicalist; The People’s Democracy; A Brief History; Crumlin Jail from the Inside; The Great Cement Strike, 1970 and Book Reviews.

The document notes that ‘Anarchic contributions are welcomed, either totally unsolicited or by a forewarning’. It is illustrated throughout – with illustrations or photographs or photomontages, some of which have a distinctly late 1960s visual aesthetic. Two pages were printed upside down – we’ve left them as is in the original work.

The Introduction makes the point that:

Time and time again the labour movement has almost succeeded in bringing class war to the fore in Belfast. This was true in 1907. It is only when they fail that disillusioned workers seeking other outlets for their despair fall easy prey to the slogans of sectarian war.

It is then a vital task for Northern socialists to learn for themselves the real history of the working class in modern Ireland, and to broadcast to the masses their true heritage. This work is necessary for those committed to one or other section of the Labour movement. The very fact that today the Labour movement in the North is going through its darkest period witness enough to the fact aht mistakes have been made in the past and that there are important lessons to be learnt from these mistakes. 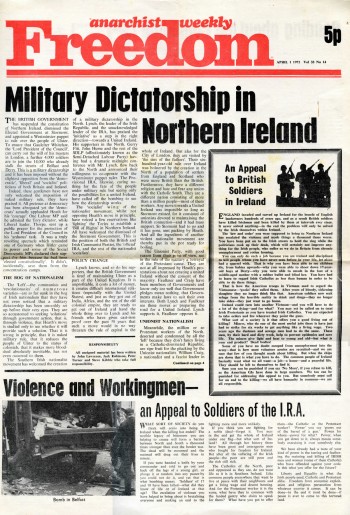 Freedom Press in the archive

See Freedom Press in the archive

See Anarchy in the archive