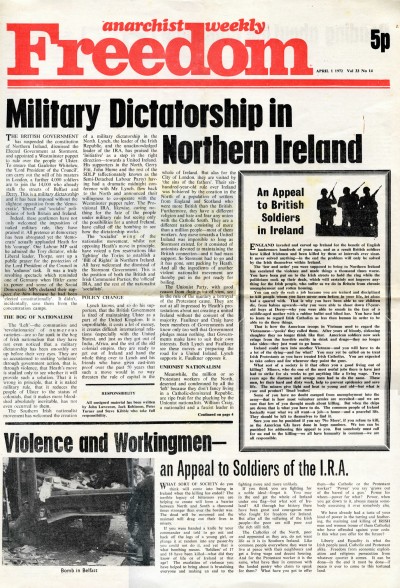 This is a fascinating document from the Freedom Anarchist Weekly, which was linked to the Anarchist Federation of Britain and printed by Freedom Press , which itself was the main mover of the publication (which remains in print and is the only regular anarchist publication in Britain) and is the oldest anarchist press in Britain.

Printed in April 1972 there are a range of pieces in the four page document. These include pieces on the Paris Commune, letters about Rhodesia, an exhortation to workers to ‘Ignore the Law!’ in relation to the Industrial Relations Act. There’s an intriguing article on ‘Scottish revolutionary bank robbers’ entitled No Power in the Barrel of this Gun. There’s a strong international component. Spain under Franco is referenced, as is the plight of US conscripts who have made the journey to Canada (and it notes that those who make it to the UK ‘where they have unwisely taken refuge’ are handed over to the US authorities.

The main focus is on Ireland and the headline is ‘Military Dictatorship in Northern Ireland’. It argues that ‘The British Government has suspended the constitution of NI, dismissed the Elected Government at Stormont, and appointed a Westminster puppet to rule over the people of Ulster’. It argues that this is ‘military dictatorship and it has been imposed without the slightest opposition form the ‘democratic, ‘liberal’ and ‘socialist’ politicians of both Britain and Ireland’.

It contends that ‘The ‘Left’ – the communists and ‘revolutionaries’ of numerous varieties are so far sunk in the bog of Irish nationalism that they have not even noticed that a military dictatorship has been smooth set up before their very eyes. They are so accustomed to seeking ‘solutions’ through government action, that is, through violence, that Heath’s move is studied only to see whether it will provide such a solution’.

Nationalism is a curse. Flags don’t feed babies, build homes, or end wage slavery. For that there is required not nationalistic fervour, but mutual aid, co-operation, and brotherhood.

Also on the front cover are An Appeal to British Soldiers in Ireland and an Appeal to the Soldiers of the IRA. The first suggests that ‘Some of you have no doubt escaped from unemployment into the army – that is how most volunteer armies are recruited – and we are sure that few of you thought much about killing. But when the chips are down that is what you have to do. The common people of Ireland basically want what we all want – a job – a home – and a peaceful life’. They should be left to themselves to find it. The latter argues: ‘The Catholics of the North, poor and oppressed as they are, do not want life as it is in Southern Ireland. Like common people everywhere they want to live at peace with their neighbours and get a living wage and decent housing. And for the Protestant worker it is the same, what have they in common with the landed gentry who claims to speak for them?’ 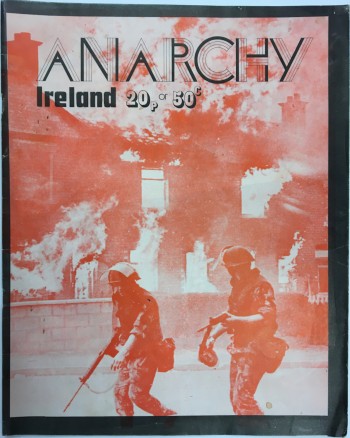 Freedom Press in the archive

See Freedom Press in the archive

Freedom is an anarchist magazine published by Freedom Press.…

See Freedom in the archive