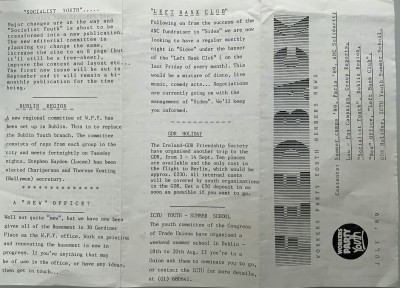 It notes that ‘following on from the success of the ANC Fundraiser in ‘Sides’ we are now looking to have a regular monthly night in ‘Sides’ under the banner of the ‘Left Bank Club’ (on the last Friday of every month). This would be a mixture of disco, live music, comedy acts… negotiations are currently going on with the management of ‘Sides’. We’ll keep you informed.

There is mention of the fact that WPY ‘has been given all of the Basement in 30 Gardiner Place as the WPY office. Work on painting and renovating the basement is now in progress. If you’ve anything that may be use in the office, or have any ideas, then get in touch.’

There is also mention that ‘Socialist Youth’, the youth publication of the WPY is about to be ‘transformed into a new publication’.

A trip organised by the Ireland-GDR Friendship Society for September of 1989 is publicised with flights to Berlin being the only cost at £230 with all ‘internal costs covered by youth organisations in the GDR’. 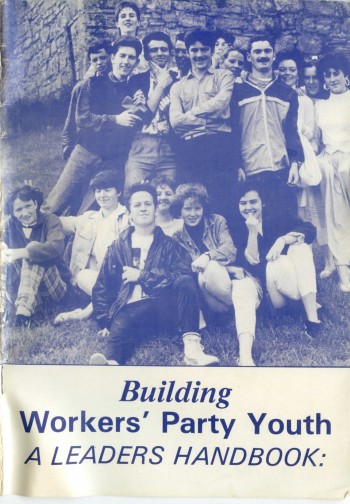 Workers Party Youth in the archive