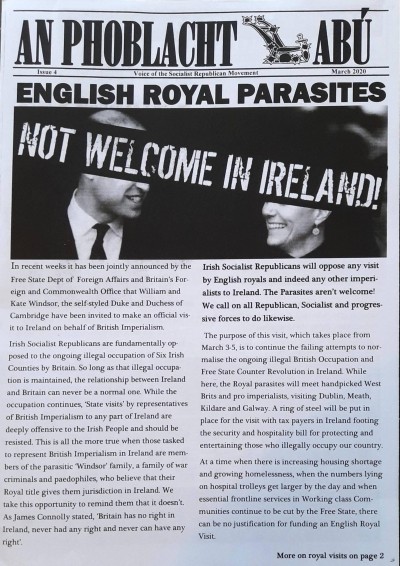 This document from last year joins another in the Archive from the same source, Anti-Imperialist Action Ireland.

This is number 4 of their publication, An Phoblacht Abú and the contents are primarily focused on the then visit of ‘the self-styled Duke and Duchess of Cambridge [who] have been invited to make an official visit to Ireland one behalf of British imperialism.’

It continues: ‘Irish Socialist Republicans are fundamentally opposed to the ongoing illegal occupation of Six Irish Counties by Britain. So long as that illegal occupation is maintained the relationship between Ireland and Britain can never be a normal one. While the occupation continues ‘state visits’ by representatives of British imperialism to any part of Ireland are deeply offensive to the Irish People and should be rested’.

The document mentions ‘the Campaign Against Royal Visits’ and notes that ‘on February 19 Macradh-Irish Socialist Republican Youth’ occupied the Free State Department of Foreign Affairs to protest at the invitation’.

There’s also an article on Election 2020. The rest of the document is taken up by an outline of AIAI and an invitation to join, as well as exhorting people to wear an Easter Lily. 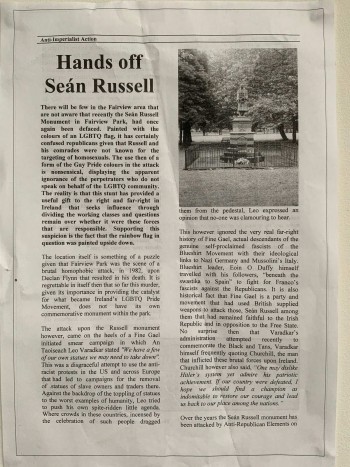 Anti-Imperialist Action Ireland in the archive

See An Phoblacht Abú in the archive