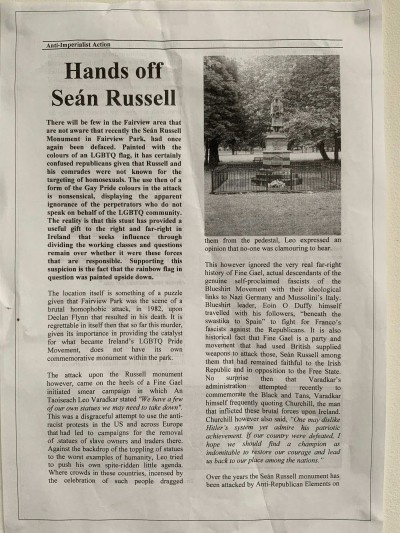 This document is from a relatively newly formed group, Anti-Imperialist Action, Ireland. A panel on the reverse side notes:

Anti-Imperialist Action Ireland is an All-Ireland Socialist Republican mass-organisation dedicated to combat and resist British, EU and US imperialism on the island of Ireland. AIA owes its allegiance to the All-Ireland People’s Republic; Proclaimed in Arms in Dublin 1916 and established on January 21st 1919.

Campaigning since 2017, AIA is building a People’s Resistance and bring all progressive forces into a united front against fascism, capitalism and imperialism. As a revolutionary socialist republican organisation, AIA continues in the best traditions of Irish Republicanism and the International Communist movement. As an All-Ireland body the organisation has coistí, events and actions across the country. If there’s isn’t a coiste in your area get in touch and form one!

There will be few in the Fairview area that are not aware that recently the Sean Russell Monument in Fairview Park, had once again been defaced. Painted with the colours of an LGBTQ flag, it has certainly confused republicans given that Russell and his comrades were not known for the targeting of homosexuals. The use then of a form of the Gay Pride colours in the attack is nonsensical, displaying the apparent ignorance of the perpetrators who do not speak on behalf of the LGBTQ community. The reality is that this stunt has provided a useful gift to the right and far-right in Ireland that seeks influence through dividing the working classes and questions remain over whether it were these forces that are responsible. Supporting this suspicion is the fact that the rainbow flag in question was painted upside down.

Taking their cue from Varadkar, members of Ireland’s disparate fascist movement have, in recent months, been posing at monuments to Ireland’s patriot dead for photo opportunities to put up on social media.

The Sean Russell monument after all, is one that is dedicated to the IRA in the dark days of the 30s and 40s and requires some respect. Naturally then, Irish Republicans will not allow the current crop of Irish fascists to claim our monuments or our patriot dead, or indeed to associate themselves with the revolutionary struggle for national liberation and an All­ Ireland Socialist Republic. It was the Black Panther Party member Assata Shakur who once warned, “It’s got to be one of the most basic principles of living: always decide who your enemies are for yourself, and never let your enemies choose your enemies for you. “

The leaflet is particularly notable for appearing during the pandemic when many forms of political expression and activity have been curtailed.

Any other documents issued by AIA are very welcome.