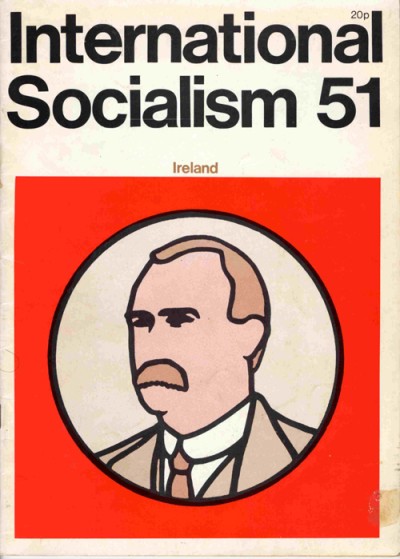 This is an handsome document, issued by the International Socialists  in Britain, predecessors of the SWP [UK], in 1972, is a special issue with a focus on Ireland.

The range of contributors is striking, from amongst others Eamonn McCann, John Palmer and Brian Trench. McCann considers ‘After 5th October 1968’, Palmer ‘The Gombeen Republic’ and Trench ‘The Two Nations Fallacy’ and there is ‘A factual survey’ of the Six Counties by Paul Gerhardt.

The article by Brian Trench is, perhaps, of particular interest in that it engages directly with the Irish Communist Organisation which it describes as a ‘reactionary Stalinist sect’. And it notes that ‘this group moved within the course of one year from describing Paisleyites as fascists to seeing them as the organised expression of legitimate Protestant national demands’.

It further argues that ‘in adopting this position, the ICO, and others who have since followed them, condemned themselves to inactivity. While state forces attacked the opponents of the Unionist regime, and the nationalist population in general, the advocates of the ‘two nations’ theory were so concerned with distancing themselves from supposed Catholic nationalist desires to oppress the Protestants, that they were unable to oppose the actual repression!’

The Eamonn McCann piece has an interesting analysis on some of the reasons for the emergence of the Provisionals, one of which it ascribes to the Left being ‘still imprisoned within the sectarian strait jacket, forced to operate almost excluseively within the Catholic community but unable to give any clear lead to the Catholic masses… And unwilling to cause a split in the [Defence Committee] barricaded area [in Derry] and doubtful about the extent of its own support, it never seriously attempted to wrest leadership from the moderates’.

The raging bitterness of the Catholics in Belfast especially after the August days was certain sooner or later to swamp Fitt and Hume. Emotions were too strong to be contained for long within the thin shell of timid respectability. The Provisionals filled the vacuum created by the effective absence of the left and the irrelevance of the right.

This last point is of some interest, given the concentration in many accounts of the period on the left and less focus on right and centre right forces and the part they played.

The Palmer piece is also of interest as it engages with the nature of British capital in the Irish economy.

And it notes that “The Organisation for Economic Cooperation and Development estimates that between a third and a half of all manufacturing concerns are either controlled or owned outright by British firms. Perhaps 70 per cent of the 100 largest companies in the Twenty-six counties are British controlled in part or entirely.”

In 1971 profits totalling £21 millions - 60 per cent of total profits of all publicly quoted companies - were pocketed by British investors.

Also published is the Programme of the Socialist Workers Movement. This is headlined as follows:

An important development in Irish Politics is the appearance of the Socialist Workers Movement, a marxist organisation based largely in the republic but with connections in the six counties.

It’s a fascinating document, not least because of the more contemporary echoes. Consider by way of example a review by one Chris Hitchens, or the list of names on the editorial board. Also note the front cover, a painting by Robert Ballagh and the short and sympathetic piece on the Underground Press which examines Oz, Time Out and IT magazines. 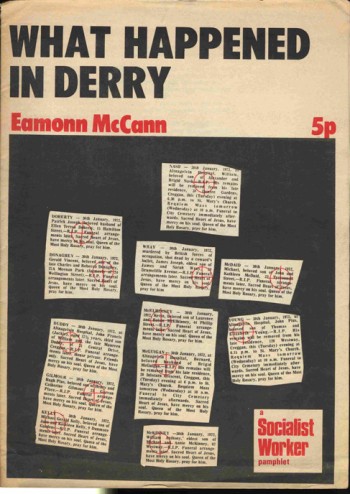 International Socialists [UK] in the archive

See International Socialism in the archive