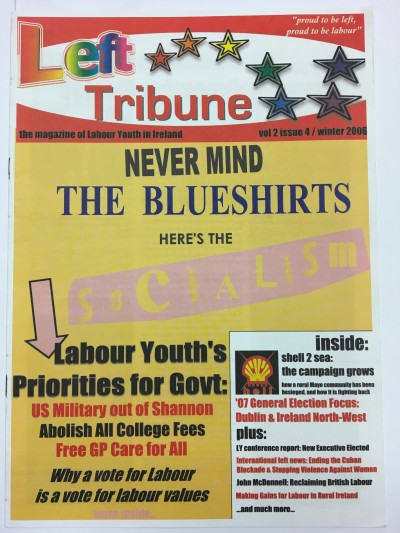 This document joins other Labour Youth publications in the Archive. The content is broad ranging – and framed by the then near-imminent general election in the Republic. Hence the front cover graphic outlining Labour Youth’s priorities for government, including ‘US Military out of Shannon’, ‘Abolish All College Fees’, ‘Free GP Care for All’ and the slogan, Why a vote for Labour is a vote for labour values.

Insider there is an election focus on various election candidates. There’s a report from the Labour Youth Conference. There are pieces on ‘ending the Cuban Blockade’ and ‘Stopping Violence Against Women’. There’s also an article on John McDonnell’s standing for the BLP leadership and about ‘Reclaiming British Labour’.

Perhaps the most indicative piece is on the Labour Youth Conference and their 10 Point Plan for Government.

The mandates established at Conference set the tone for another active, campaigning year in the organisation. Featured among the national issues discussed were the bin tax, child poverty, same sex marriage, Shell to Sea, and the pro-choice campaign, while international affairs included motions on Cuba, Belarus, and the upcoming leadership election in the British Labour Party. Crucially, Youth Conference also unanimously affirmed its support for non-violent direct action as a legitimate tactic in these campaigns and oth­ers that the organisation has been involved in over the past year.

With the general election looming however, party issues and electoral strategy proved a particularly topical issue among delegates. Internal party democracy was a common theme, with much debate centring on how best to ensure that Labour Youth policy is transferred to the policies of the main party, and that our priorities are included in the Labour Party manifesto for the upcoming general election. The “Seize the Power” initia­tive was encapsulated in the motion pro­posed by last year’s National Youth Executive, which outlined ten key areas for the incoming officers and activists around the country to campaign on for inclusion in both the mani­festo and in any possible programme for gov­ernment. These priorities were drawn from all aspects of Labour Youth policy, and includ­ed U.S. military landing in Shannon, the aboli­tion of all college fees, and the introduction of legislation guaranteeing the right of workers to union recognition in the workplace.

The current pre-election pact with Fine Gael also came under fire from delegates during the course of the Conference. The large­scale opposition that exists in LY for the arrangement was shown clearly with the resounding approval received by Dublin South West Labour Youth’s motion on elec­tion literature. The motion called explicitly for members not to participate in the distribu­tion of material that called for a transfer to the Fine Gael party, and clearly reaffirmed Labour Youth’s preferred independent elec­toral strategy as outlined in last year’s policy document “Towards an Alternative Politics”.

Also outlined were the 10 points.

Conference called on Labour in Government to: 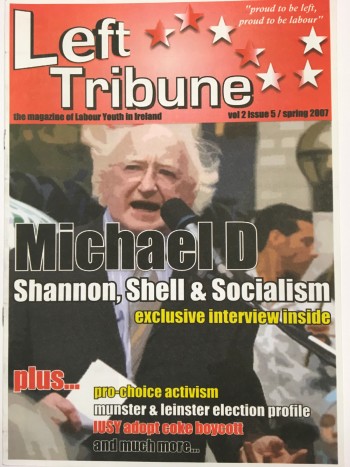 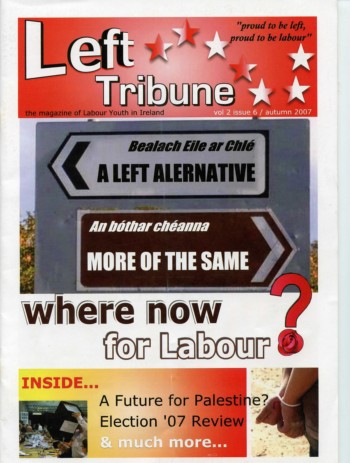 Left Tribune in the archive

Labour Youth is the youth wing of Labour, founded in 1979.…

See Labour Youth in the archive

Left Tribune was published by Labour Youth, the Youth organisation of the Irish Labour party.…

See Left Tribune in the archive