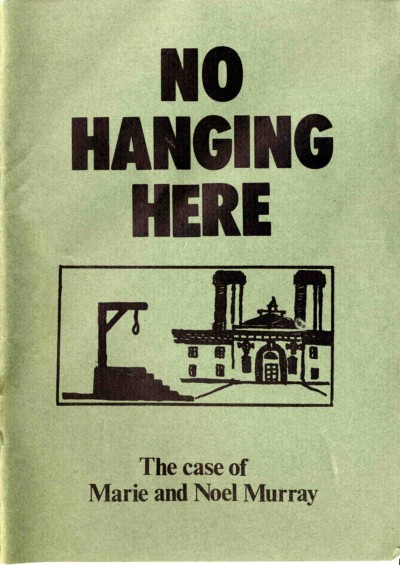 An interesting document [and many thanks to the person who forwarded it to the Archive] that serves as a companion piece in some respects to the pamphlet in the Archive on the Sallins Train Robbery and the subsequent arrest of members of the IRSP.

This was issued by the Murray Defence Committee in 1976 or early 1977. It concerned the possibility that Noel and Marie Murray might be hanged for the murder of Garda Michael Reynolds after the Death Sentence was passed during their trial.

Noel Murray had been a member of Sinn Féin from 1966 and had gone with Official Sinn Féin in 1970. Marie Murray had been active in the Housing Action Committee in Dublin in 1969 from which she had joined OSF the following year. Both had left OSF in 1973 but remained politically active - apparently on the anarchist left. Some sources suggest they were part of the little known anarchist splits from OSF - Dublin Anarchist Group and New Earth.

As noted in The Lost Revolution, The Murray Defence Committee was not supported by Official Sinn Féin.

The pamphlet here is very much focused on the Death sentence which was initially handed out [and only later on appeal was set aside because they could not have known that it was a Garda that was shot, since he was off-duty] and reporting the trial and refers almost not at all to issues of guilt. It gives considerable space to the conduct of the trial and the situation leading up to it subsequent to their arrests.

Interestingly it positions both of the Murrays as being ‘politically active’ and ‘continuing to fight for…an independent socialist Ireland’.

As was noted to me by the person who very kindly donated it to the Archive:

On the photo on P.3 - carrying the banner on the left is Tony Gregory. Marching behind him are Mick Ryan and Seamus Ó Tuaithail.

There is also some literature relating to this case here on the Irish Election Literature Blog.

The Murray Defence Committee was formed in 1976 following the arrest of Noel and Marie Murray for the murder of Garda Michael Reynolds and the passing of the death sentence on the two at their trial.…