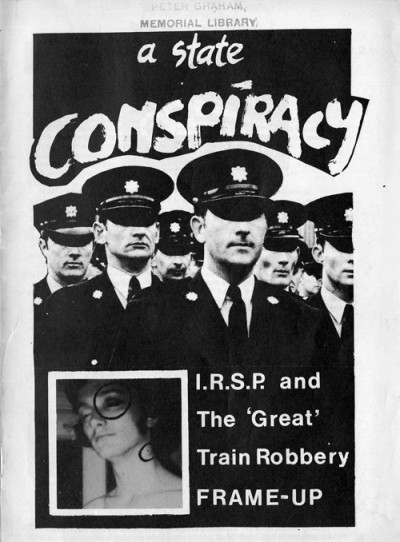 This is a document, and thanks to JM for forwarding it, published by the Kildare Six Defence Committee and initiated by the Irish Republican Socialist Party on behalf of members who were arrested after the Sallins Train robbery. Published sometime in 1976 or 1977 (a more accurate date would be much appreciated - but it clearly was produced between the Sallins robbery and the murder of Seamus Costello) it provides an overview of the formation of the IRSP as well as a graphic outline of the ill-treatment of IRSP members in the wake of the train robbery. In regard to the former it notes that:

The events of the first 7 months of their existence are well documented. With 3 of their members murdered and over 30 wounded in Belfast it was made clear that the party would not be intimidated out of existence. Throughout the duration of the conflict the media in general sided with the Officials and presented the false image that the IRSP was composed of gangsters and sectarian killers.

Despite being only 16 pages long it is an exhaustive window into a particularly bleak period of modern Irish political and social history.

The analysis presents the actions of the state as follows:

Anyone who doubts our claim that the frame up is politically motivated or who believe that the torture took place without Official sanction should look closely at the evidence. The arrest of the party Chairman, the Secretary, the Editor of the party paper, the illegal seizure of the party office, the burning of office files, all were designed to cause the maximum of disruption of legitimate party activity. In fact many people were solely questioned about the political activities of the IRSP. … All Republican, Socialist and Democratic organisations must unite in defence of democratic rights. It is the task of the above to build up a political interest in the case among the working class. This would effectively put a brake on the steady drift towards a Southern police state and the daily erosion of basic civil liberties.

Worth noting that the distinction between the Kildare 6 Defence Committee and the IRSP is not entirely clear, to the point that there is an advert for the ‘Starry Plough’ on the second last page.

By the way, for any interested in seeing the actual printed document the National Library has a copy.

The Kildare 6 Defence Committee was established on behalf of the Irish Republican Socialist Party in the wake of members arrested after the Sallins Train Robbery.…