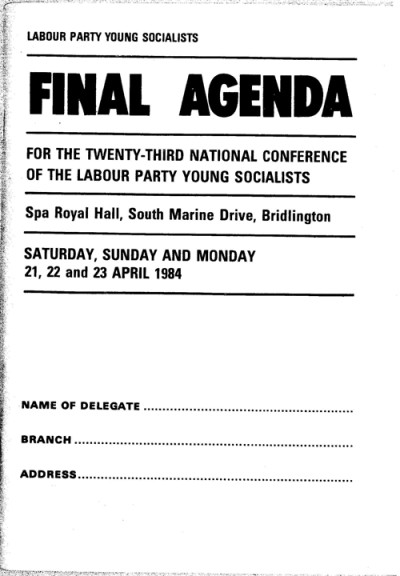 With thanks to neilcaff for forwarding this to the Archive, a useful document which gives an insight into how the issue of Ireland was perceived by sections of the UK left. As has been noted here … The Labour Party Young Socialists were…

…the youth section of the British Labour Party, and was effectively a part of the Militant Tendency within the Labour Party during most of the late 1960s and 1970s and through to the 1980s.

But as neilcaff also notes this was not an exclusively Militant environment.

this [was] a debate by people aged 16-23. Also I think it should be emphasised that this was conference of young people of 2,000 elected delegates. So while the Militant Tendency did have the predominant influence at the conference it by no means totally dominated it either.

Certainly the use of language which uses a number of terms in some motions interchangeably, most notably Republican and Catholic, appear drawn from a wide variety of stances, reflecting the different views on the matter on the left in Britain during this period.

From this remove one of the most striking proposals is for the establishment of a ‘trade union organised workers defence committee to protect working class homes against sectarian and state violence’, a policy that had been characteristic of Militant thinking on Ireland both long before this and well after.

It’s also notable that some of the motions argue that ‘the only way forward for Northern Irish workers in the formation of a Labour Party based on the Trade Union Movement with socialist policies, and sees the importance of the British Labour movement in the achievement of this aim’.

Horsey and Wood Green LPYS also takes emollient stance as regards Sinn Féin, arguing that ‘as Socialists we have a duty to defend the right of Sinn Fein to organise publicly and to defend anti-imperialist militants that are harrassed and imprisoned due to their opposition to the British presence’.

Overall a very useful addition to the Archive. More documentation like this indicative of the approach of various political parties on this discursive policy discussion level would be very welcome to add to various Clárs already in the Archive. 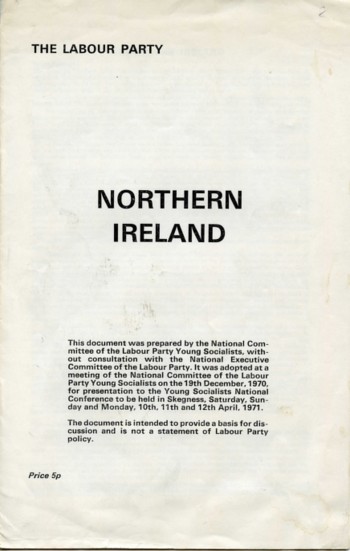 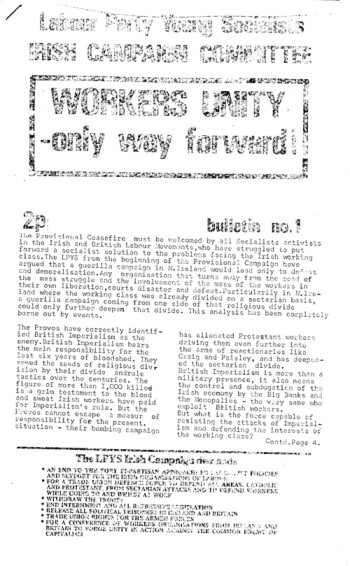