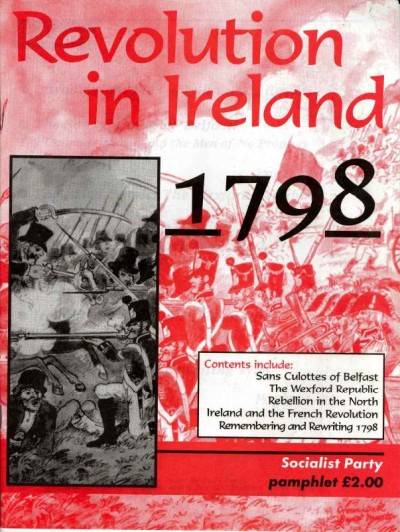 Many thanks to Budapestkick for forwarding this document to the Archive. He raises the interesting point that it would be well worth while comparing and contrasting it with other 1798 commemorative documents from other formations. If people have any and are willing to forward them onto the Archive - using the contact email on the right hand column of this site - that would be very helpful.

This is the first document from the Socialist Party added to the Archive, which demonstrates a hitherto considerable gap in the collection. We hope to remedy that in the weeks and months that follow - although we do have a reasonable quantity of Militant material already online here.

This is a fairly lavish document which contains a series of short articles on aspects of 1798 by different authors. The introduction, entitled ‘1798 - Myth versus Reality’ discusses the large amount of writing on 1798 and its meaning that appeared in the years before 1998. The Socialist Party’s aims in producing the pamphlet were as follows

We are producing this pamphlet in order to make available to the left wing public some of the findings of more recent historical research as well as our own analysis of the importance of the revolutionary events of the 1790s for the workers’ movement today. The aim is not to produce a comprehensive history but rather to focus on some of the key facets of the revolution including the role of artisan workers in Belfast, the Wexford and Ulster risings, the connection with the French Revolution and the ways in which the history of the rising has been manipulated.

The introduction goes on to account for 1798 in terms of social and religious inequality within Ireland in the eighteenth century, and the influence of the American and French revolutions. It acknowledged that the extent to which the Defenders had moved beyond sectarianism is far from clear. It argued that the working class played a decisive role in the French Revolution and in Ireland, but was incapable of taking power for itself. It then discusses how people have sought to use 1798 for political purposes since the late nineteenth century. It rejected the idea that 1798 justified the position of Sinn Féin in 1998.

In fact, it is not possible to make a simple analogy between the situation in late 18th century Ireland and today

It then discussed what it saw as the failings of nationalism and unionism, and said that the defeat of a radicalised labour movement in the period 1917-23 led to the creation of two sectarian states in Ireland. The introduction concludes:

Understanding what really happened in the past and dispelling Orange and Green myths is indeed vital. But it is only by combining historical understanding with a working class socialist programme, which among other things recognises that this island’s bitter history has now created two minorities - Catholics within the North and Protestants on an all-Ireland basis - that a progressive solution to the national question can be found.

The next chapter is an extract from John Gray’s The Sans Culottes of Belfast. Gray was the Librarian of the Linenhall Library, and not a member of the Socialist Party. His pamphlet stemmed from his 1991 May Day lecture which marked the bicentenary of the foundation of the United Irishmen. In the words of the SP preamble to this extract:

The extract focuses on strikes by cotton and linen weavers in Ulster in 1792, the high point of artisan working class militancy in the 1790s. It clearly illustrates the tensions between the pro-capitalist leadership of the United Irishmen and the interests of workers who were increasingly prominent in the revolutionary movement of the 1790s.

Ruth Coppinger’s account of 1798 in Wexford attacked the Faith and Fatherland version that emerged in the late nineteenth century, and argued that events in Wexford were the result of deliberate and careful planning rather than the spontaneous response of an oppressed peasantry. She also defended the Wexford United Irishmen against the charge of sectarianism, despite what are termed the breakdowns of discipline at Scullabogue and Wexford Bridge. She stated that:

The attempt to claim 1798 for one political or religious tradition should be ended in this bicentenary commemoration. The shared political project of the United Irishmen should be studied and discussed, now more than ever. The defeat of the 1798 rebellion marked a sad end to a century which had shown the potential to unite people of all religions in a republic in the true, original sense of the word.

Anton McCabe looked at 1798 in the north, arguing that it cannot be reduced to Antrim and Down, and focusing on west Ulster. It was a more straightforwardly historical account than the others, but finished by noting the fate of William Henry Hamilton of Enniskillen after Emmet’s Rebellion of 1803.

As a revolutionary, he personified all that was internationalist about the United Irishmen, and died fighting in the army of Simon Bolivar for the liberation of South America from the Spanish Empire.

The United Irishmen were a consciously internationalist force inspired by the most profoundly revolutionary events the world had yet seen. Whatever their weaknesses, if there is one thing that socialists can draw inspiration from, it is this spirit of thoroughgoing internationalism.

Eoin Magennis’s concluding chapter examined the way 1798 had been remembered and the way its history had been rewritten, from as early as 1799. He noted how the commemorations of the bicentenary were linked to the peace process.

But in 1998, the “peace process” is in bloom, the Celtic Tiger roars and an assertive bourgeoisie finds it convenient to rediscover Wolfe Tone and his comrades as the forefathers of a more tolerant, secular national identity. This is all connected to the much ballyhooed - and essentially non-existent - reconciliation between the North’s “traditions.”

An interesting document then, and although - inevitably - research on this area has progressed subsequently it provides a good overview of thinking at the time. It is therefore useful for what it tells us about the SP’s view of Irish history and about the views of others on the United Irishmen. 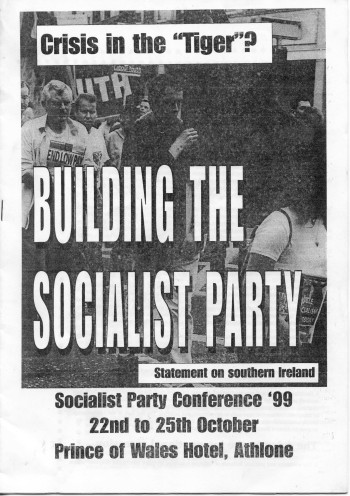 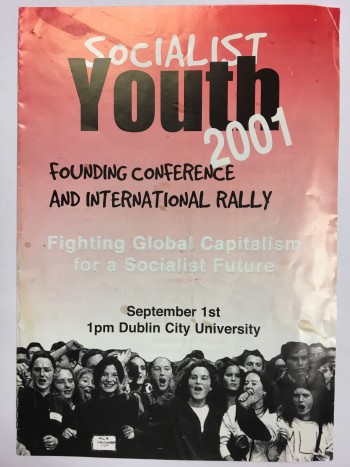 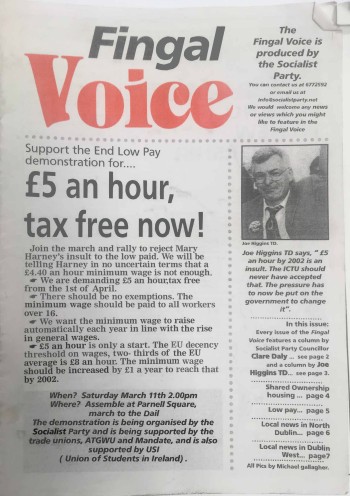 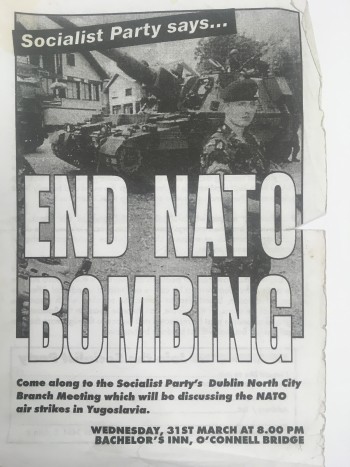