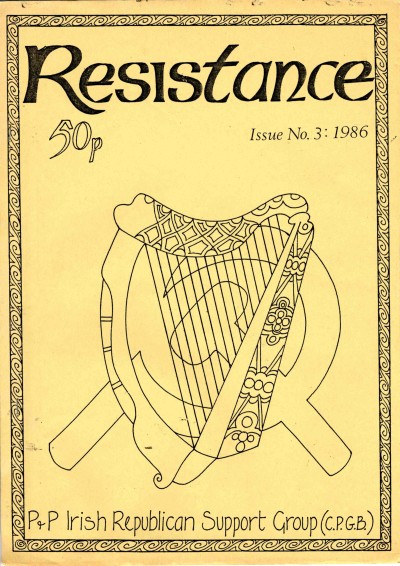 Here is an intriguing document issued by the Irish Republican Support Group [within ?] the Communist Party of Great Britain.

The Support Group operated without official sanction and appears to have had something of a half-life within the CPGB – indeed as was noted to me the way in which the text shifts between ‘I’ and ‘we’ perhaps indicates a small number involved. The cover shows an harp superimposed on a hammer and sickle and bordered by a Celtic styled motif and it is perhaps fair to say that this represents its stance which was one of largely unconditional support for Republican, for which read PIRA, prisoners and more broadly the armed struggle.

This issue dates from soon after the signing of the Anglo-Irish Agreement. The editorial takes an uncompromising line.

This agreement has been initiated by the British oppressors with the help of their Irish puppet collaborationists as a frantic attempt to halt the strengthening and growing popularity of the Republican movement. Realising that Sinn Féin can count of [sic] on at least 43% of the nationalist vote and faced with the ineffectual confused babbling of the SDLP, the British government had to find some way of destroying Sinn Féins rising support.

It mocks the SDLP stance and continues:

It is falling into the trap of opportunism, when we accept petty attempts at reform and allow them to distract from what is really needed… a complete withdrawal of British interests (political and military) from Northern Ireland and the removable of the border. Off [sic] course Britain prefers to deal with the slaves who accepts a ‘reasonable’ attitude towards their chains and prefers to destroy the uncontrolable slave who will stop at nothing short of liberty.

There’s an interesting analysis of the then recent UK elections where the editorial lambastes the SDLP ‘(following in the tradition of Labour reformism) [who] refused an electoral pact with Sinn Féin, preferring to split the nationalist vote. For this they are responsible in assisting the Unionists to return to Westminster. Is this really the actions of a party working for a United Ireland?’

On Sunday 2nd. Feb. a march in London marks the 14th anniversary of Bloody Sunday — a march which is supported by a whole variety of organisations on the left (including the Communist Campaign Group), but not the Communist Party (Great Britain). Like last year and the years before the Communist Party has chosen to ignore the march. Like many Communists, I will be embarrassed and ashamed at the attitude of my Party on Ireland in general and on this march in particular.

One of the crimes of the Communist Party at present is a representation of the crime of the British people regarding Ireland; political ignorance combined with apathy. Finally we note with interest the increased reportage that events connected with Ireland has received in the Morning Star. Although we still have profound differences with the Star on Ireland, their recent coverage is a step forward.

The right of Irish people to carry resistance to oppression by any means they see fit must be clearly recognised. A fact, however inconvenient for the British Left.

There’s more, including derision poured on the Workers’ Party for their showing in the Election results (although in fairness the WP vote in Upper Bann was pretty respectable), a rather scathing overview of the Connolly Association and letter from Jack Conrad of the Leninist. There’s a piece on Irish POWs and a reprint of a Cormac cartoon from An Phoblacht/Republican News. Notable too is the somewhat revolutionary pagination system.

All told a fascinating addition to the Archive. 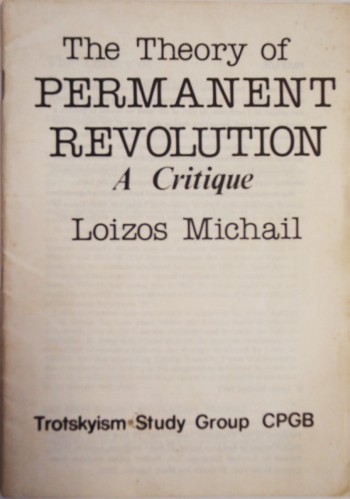 The Theory of Permanent Revolution: A Critique (1977) 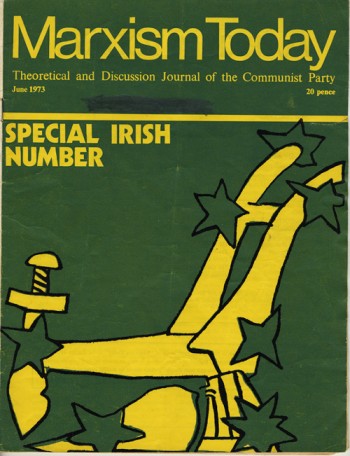 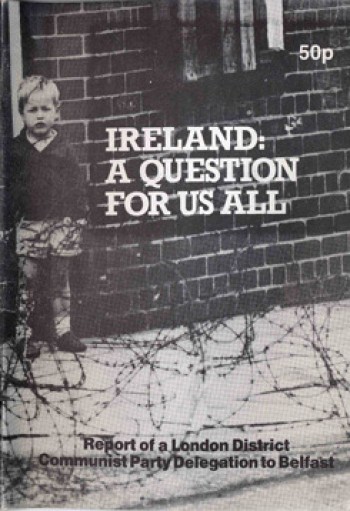 See Resistance [CPGB] in the archive