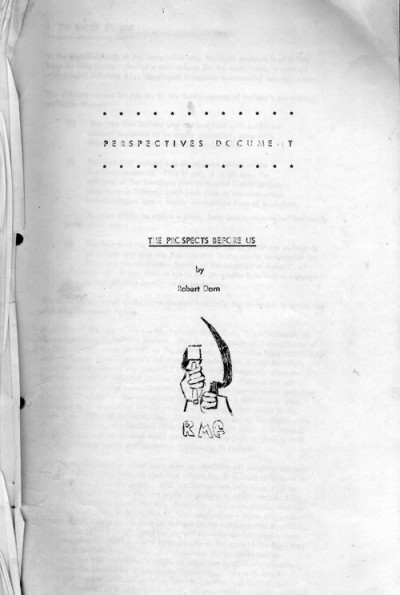 The Revolutionary Marxist Group  is an intriguing Trotskyist formation on the Irish left from the 1970s. Never very large it consisted of former members the League for a Workers Republic and Young Socialists, according to Wiki. Some of our regular contributors will, no doubt, add detail to this picture.

This a fascinating document, written by the pseudonymous “Robert Dorn”, that attempts in a number of chapters to provide a rationale (perhaps retrospectively) for the political position of the RMG and potential alternatives. In the course of engaging with that there’s some good analysis in here of Republicanism and Irish politics.

This ideology makes only fitful pretence to the Socialism claimed as the ideal by the movements in Britain and Europe. Here, of course, we refer to militant Republicanism (Gardiner Place and Kevin St.). At a later stage of development, we will have to face up to a further fact: that the form of Republicanism that exercises most hegemony over the workers is, still, neither that of Gardiner Place nor that of Kevin Street, but the pretender of Upper Mount Street; the Fianna Fáil cuckoo. The extreme vagueness of Republicanism [sic] precepts (basically: ‘Break the connections with England and you’ll be all alright’) enabled this situation to come about. The victory of the ‘Yes’ vote in the recent referendum exposed the limitations of militant ‘Separatism’ and the creed could give no reason such a vote was incompatible with their basic views.

And the mention of certain groups places this within a clear historic timeline.

The circumstances that have made for the predominance of Republican ideology in the Irish working class have prevented any sort of serious opposition from being counterposed to it. The Irish Labour Party developed from a rigorous application of a syndicalist economist interpretation of certain aspects of the teachings of James Connolly inevitably becoming an expression of petty bourgeois Social Democracy. Such an ideology only has its staying power in the metropolitan state of imperialism. Basically, Irish Social Democracy accepts that ireland is another such state. This is at loggerheads with the facts. It has cut off the I.L.P. From any permanent claim on Republicans and has left it to depend entirely on imperialism’s ability to industrialise Ireland: and ability, as we are seeing, of only limited range. The development of an apparent ‘Tribunite’ tendency around the Liaison Committee of the left is not based on an internal ‘Tribunite’ base, but on the influx of debased Trotskyists and Stalinists.

There are also harsh words for the Communist Party of Ireland…

But, of course, there is a further complication. Real Communists might have been able to survive and develop better than the vanguard with which (until recently) the Irish working class has been lumbered. The history of Irish Stalinism includes 1 1/2 liquidations of its party. The first (1923) was to accomodate to the Syndicalist, Larking. The second (1941) (in the Twenty-Six Counties only) was aimed to overcome the embarrassment that would be given to the USSR by its allied party supporting the war effort of Russia’s ally and Ireland’s oppressor.

There’s also some background to Trotskyism in Ireland.

A more certain Trotskyist strain was already developed. This was amongst certain of [Michael] Price’s followers but also amongst members of Fianna Éireann who were disillusioned with the lack of politics of the Republican leadership…After the War, these formed a short-lived Revolutionary Socialist Party of Ireland which constituted to the only Irish section fo the Fourth international to date. This never grew beyond twenty. It was liquidated early in 1950…

Later many of them were to be prominent around Noel Browne, during his last period of organisational independence. However, by this time, they had lost most of their original revolutionary fervour. They did not try to create a proper Bolshevik Party out of Noel Browne’s National Progressive Democrats…

A complaint - however sardonic - one doesn’t hear every day.

The document also deals with the RMG itself and clearly delineates its ideological position:

In January 1972, we broke finally with the LWG and its YS. In February we held our founding Conference. Since then, we have been guided by three main lines, as defined by the faction fight, as much as anything. (1) A general agreement with Comrade Ernest Mandel’s analysis of the developing crisis in world capitalism. (Though, in detail, a disagreement with his delineation of the qualitative change from Imperialism to neo-capitalism) and a resultant support for the Fourth International. (2) The general view that the main propaganda field is on the national issue. (3) Affiliation to the SLA. The weakness is, that except for the first and Comrade MacGregor’s bluepring for action in Northern Ireland, nothing much has been done to spell out this (in itself correct) strategy.

There’s a most interesting analysis of the prospects for entryism to either Official or Provisional Sinn Féin where one of the reasons not to try the former is..

…it’s traditional activism harnessed to the policies of its leadership means that real entry work will entail activity, not alone time wasting, but of an actively counter-revolutionary nature. Trotskyist entrists will have to agitate for a ‘Northern Irish Bill of Rights’ and to sell the United Irishman with its libellous attacks on our politics. (This is more than was expected of Troskyists in the Labour Party). In the case of Kevin Street, there is always the pitfall of its undoubtedly Fascist (Fennell) wing and that it will distort the course of the struggle.

There are many names already familiar to those who have studied this topic over the years, and it’s written in a readable and in places highly entertaining style. Well worth considering. 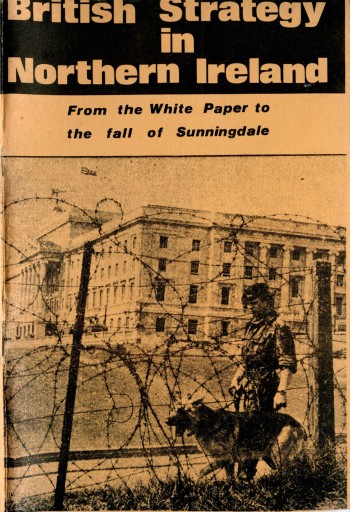 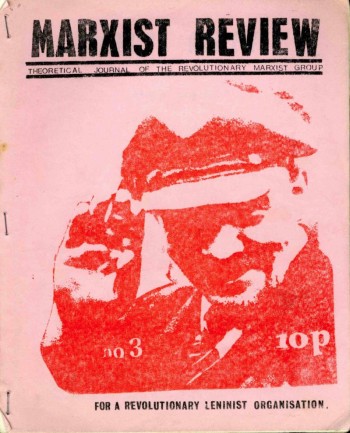 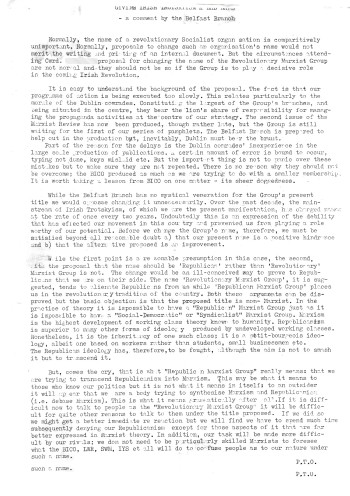