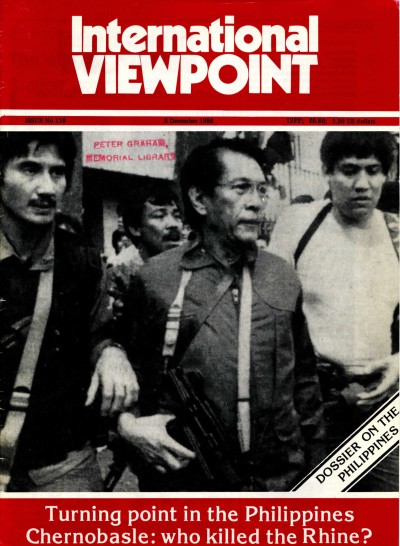 Many thanks to JM for forwarding this to the Archive, an excerpt of articles from International Viewpoint on the issue of Northern Ireland. IV was the ‘fortnightly review of news and analysis published under the auspices of the United Secretariat of the Fourth International‘. As such it was an expansive multipage magazine format.

This issue is notable for three articles, one on ‘Dutch complicity with British repression’, an entire reprint of a speech by Gerry Adams “The Revolutionary Reconquest of Ireland”, and a piece on Sinn Féin debating abortion policy by Toni Gorton.

The two latter pieces are of perhaps most interest at this remove. The latter notes the reversal of the right to choose policy that had been adopted at the previous year’s Ard Fheis and the course of the debate around that. The reversal meant that:

We are opposed to the attitudes and forces that compel women to have abortions, we are opposed to abortion as a means of birth control, but we accept the need for abortion where the woman’s life is at risk or in grave danger…

The Adams speech is framed in International Viewpoint as ‘illustrating the process by which the republic leadership came to its decision and the arguments it used to convince the majority of the movement [to participate in parliamentary politics in the formally independent part of the country]’. It notes that ‘there has been a split, which is not insignificant, but whether or not it will become a real challenge remains to be seen’.

It notes that the speech references ‘dual power’ and the rejection of same by the SF leadership in 1986 as against the prevailing situation in 1918.

A useful addition to the archive.

International Viewpoint is published by the reunified Fourth International. First published in 1982, it succeeded Intercontinental Press.…

See International Viewpoint in the archive