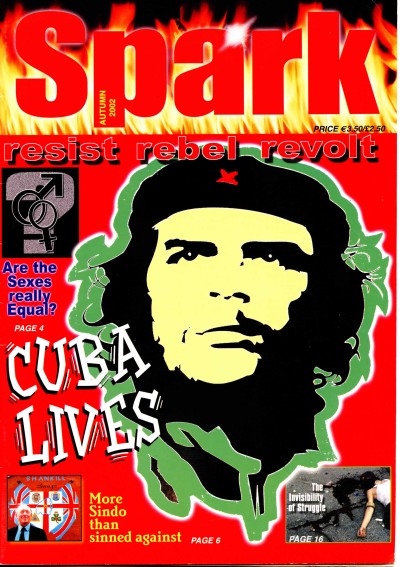 A range of documents were donated to the Archive from a number of groups and organisations from the 2000-2002 period – and many thanks to the person who did so. We’ll be posting them up over the Summer in order to get a sense of the specific concerns during that period, now a good decade and a half ago. This is the first.

This is the first edition of the Spark to be added to the Archive. A 36 page long well produced document it covers a lot of areas. Produced on behalf of Ógra Sinn Féin it is clearly positioned both as a publicity and recruitment vehicle. It takes an avowedly left-wing position, albeit a broad one.

The editorial argues that ‘Unionists, Britain withdrawing from peace’ and argues that ‘many factions of the pro-British forces in Ireland combine under the umbrella strategy of a ‘pipe-bomb in the one hand and a veto in the other’. This in particular focusses on loyalist murders of young people from republican and nationalist backgrounds.

Whether it be Afghanistan, Iraq, Eastern Europe, Colombia, Nicaragua, or other countries that have provided strategic battlefields for the US or Britain, imperialists have manipulated, equipped and unleashed the most barbaric and degenerate pseudo-political indigenous forces on the world, in order to counter what they have seen as threats to their hegemonic order.

We often think of ourselves in Ireland as far removed from these regimes, but the Six Counties is no different. ‘Terrorism’ is the only term one can use to describe what Britain has now created, and what it must now dismantle. The sue of UDA terror as a counter insurgency tactic, to do Britain’s dirty work, has been the subject in recent times of well-publicised investigations into individual killings, but the effects of all this on the wider society have not been adequately scrutinised. Sectarianism has festered, and is envenoming community relations in the Six-County statelet.

Amongst other articles are pieces that examine the murder of Pat Finucane, equality of the sexes and the Sunday Independent. There’s also pieces on the rise of the far-right in France as well as the conflicts in the Balkans during the 1990s. 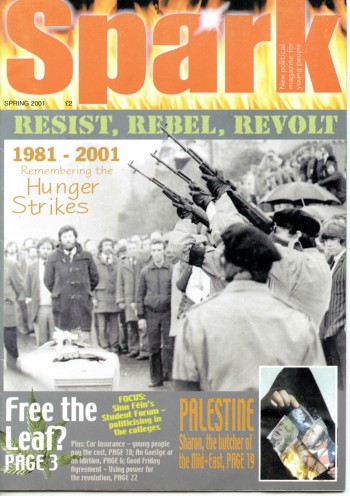 Spark in the archive

Spark is a quarterly magazine published by Ógra Shinn Féin, the youth wing of Sinn Féin.…

See Spark in the archive