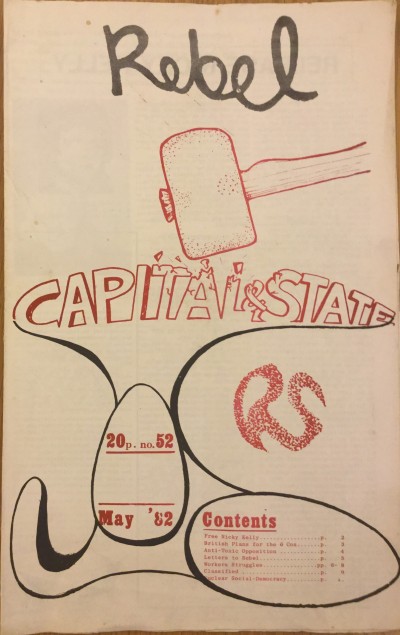 This document joins other Revolutionary Struggle publications in the Archive. As noted previously…

Revolutionary Struggle was an activist group in Dublin, from 1975 until the mid 1980s. It was involved in the production of the Ripening of Time publication and Rebel. Drawing on New Left influences it was avowedly Marxist-Leninist in orientation.

This edition has a broad range of topics covered in its 12 pages. Articles included engage with the Nicky Kelly imprisonment, British plans for the Six Counties, Workers Struggles and Anti-Toxic Opposition. There’s a somewhat slapdash style to the publication, not least the cover image depicting a hammer smashing Capital and State. Of particular interest is that this was published during the period of the Falklands War. This argues that:

…the Argentinian fascists and the Tory right-wingers are trying to outdo each other in posturing and threatening noises. Ideally, two right wing set-ups butchering each other could be quite positive for the revolution. If it weren’t for the fact that the world is a powder keg right now…and that Armies lose wards whilst he working class loses its sons.

The piece on the Six Counties has a critique of then plans by the British government for Northern Ireland articulated in the ‘Framework for Devolution’. It notes that:

This time around power sharing has been dropped as a concept and objective. Instead we have this absurd 70% which is supposed to be the ruse to con both sides… and convince the British that a position is acceptable to both sides [if a decision had 70% agreement in the Assembly that would be sent to Westminster].

Another piece looks at the French Socialist government under Francois Mitterand and the impact of the anti-nuclear struggle there. Some interesting points about how trade unions and parts of the left broke over the issue.

There is an editorial on the last page which notes that:

Most comrades who had put a lot of hopes in the H-Block/Armagh mobilisation of last year have now come to recognise – and admit – that in 1982, the revolutionary anti-imperialist movement suffered a defeat… a set-back. The reality of that defeat and its political consequences have not been played out yet. But we can see some of the effects in the large-scale mass confusion in the 6 counties as well as the widespread rise of social-democratic and reformist politics in the 26 Counties.

For us, in Rebel and Revolutionary Struggle, both aspects of this 1982 Irish reality are not only interlinked and dialectically connected, but demonstrate how, in practice, the NATIONAL and SOCIAL struggles are the two poles of the very same equation; THE STRUGGLE OF THE PEOPLE AGAINST IMPERIALISM AND ITS LOCAL ALLIES.

Plan, work, organise, study and debate, build your infrastructure and contacts, increase your discipline and watchfulness, defend your comrades… until victory. 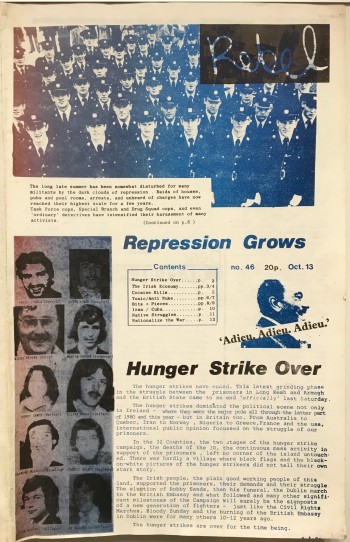 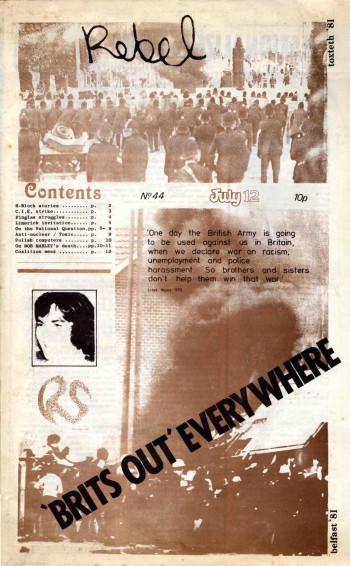 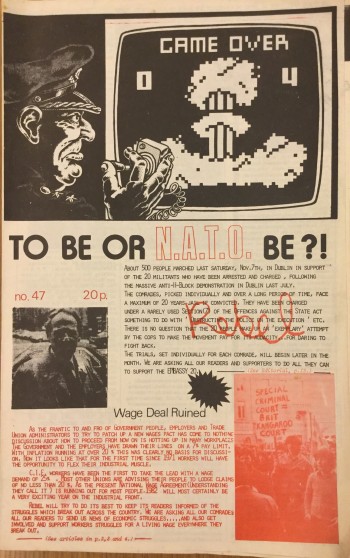