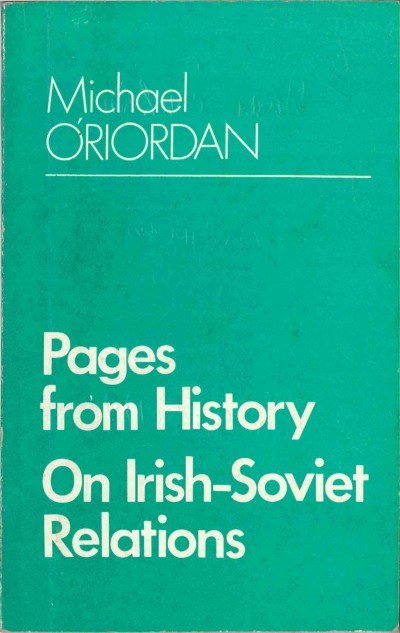 This is a fascinating document, over 70 pages long, a pamphlet on Irish Soviet relations from the October Revolution onwards. The Foreword notes how a ten-strong delegation from the Dublin Trades Union and Labour Council visited the USSR and published a report on their visit. It argues that:

…in the Introduction to their Report, giving as it does a précis of the developments just before and after the most important event in world history, is as fitting a foreword to this outline of Irish-Soveit relations, written for the occasion of the 60th anniversary of the Great October Revolution, as it was when that group of Irish trade unionists covered the long distance – as it was the – from Ireland to Moscow to honour the 12th anniversary of the great achievement of the workers, soldiers and peasants of Russia.

The Contents are arranged under a range of headings, ‘Diplomatic Relations’, ‘Lenin’s Links with Ireland’, ‘Lenin and the Irish Revolt of 1916’, ‘A Tale of Two Treaties’ and so forth. But it also contains O’Riordain’s personal observations, as with the following:

[For me]… there was the rich experience of seeing the concrete example of Lenin’s policies on the national question as I witnessed date multi-national character of five thousand delegates at the 25th Congress of the Communist Party of the Soviet Unoin, February, 1976. It was a vivid, colourful and inspiring gathering of so many different nationalities of one state.

Perhaps unsurprisingly it does not mention much in the way of contacts in the latter part of the twentieth century between Marxist or Marxist influenced groups in Ireland and the Soviets, preferring to focus on the relationship between the CPI, or IWP as was, and the USSR.

New Books was the name of the bookshop run by the Communist Party of Ireland in Dublin, through which several publications and pamphlets were produced under the New Books Publications imprint. The bookshop was renamed Connolly Books in 1989.…