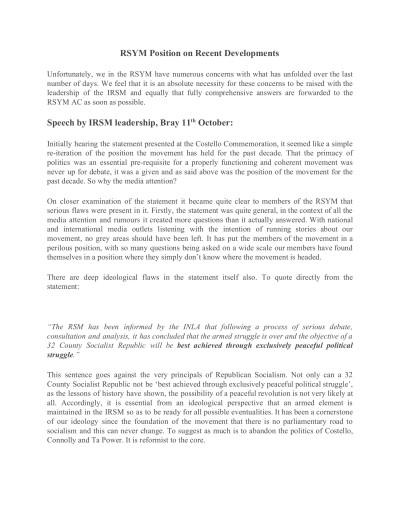 This document is five pages long and represents a response by the Republican Socialist Youth Movement to developments in the Irish Republican Socialist Movement, namely the conclusion in a statement from the IRSM issued in October 2009 that “the armed struggle is over and the objective of a 32 County Socialist Republic will be best achieved through exclusively peaceful political struggle.”

The RYSM is deeply critical of this conclusion and argues that it ‘goes against the very principals of Republican Socialism’.

Notable are those it references as embodying the those principles:

Not only can a 32 County Socialist Republic not be ‘best achieved through exclusively peaceful political struggle’, as the lessons of history have shown, the possibility of a peaceful revolution is not very likely at all. Accordingly, it is essential from an ideological perspective that an armed element is maintained in the IRSM so as to be ready for all possible eventualities. It has been a cornerstone of our ideology since the foundation of the movement that there is no parliamentary road to socialism and this can never change. To suggest as much is to abandon the politics of Costello, Connolly and Ta Power. It is reformist to the core.

In some respects the arguments outlined in the document are ones that were contentious from the establishment of the IRSP and are central to its relationship with the INLA. It is perhaps notable that the RYSM was founded in 2005.

Under the heading ‘The Use of the Armed Wing’ it argues that:

A lot of this debate has focused on whether the armed wing is productive at this point to the overall political goals of the movement. The consensus among the leadership has been that it is not, that it actually hinders our political aspirations. This is not a Marxist analysis. Yes we in the RSYM agree that the conditions for armed struggle in the North against imperialism do not exist. But the INLA is a republican SOCIALIST army, just because it may not have a role in relation to the British occupation at this point does not mean it won’t have tomorrow, as we don’t know what conditions will develop. And it certainly doesn’t mean that the armed wing has no role in the class war, in any of the 32 counties.

The reputation of the INLA and its association with drugs and feuding of course does hinder the movement somewhat. But this can be tackled, it is not something to stand down over. Under no circumstances should a Republican Socialist army, the army of the workers, bow to popularism and bourgeois media slander. The INLA and its reputation is an issue of concern, but it is much more a case of the way it manifests itself and acts than its existence. Its existence is ideologically sound.

One of the most striking aspects of the document is how open it is in regard to these issues.

It concludes by noting:

There has been so much confusion, ideologically especially, that if the IRSP was actually to progress and get elected representatives at some point we in the RSYM would be very doubtful the movement would be ideologically strong enough to prevent us moving towards reform. Removing the INLA will not change this one iota, it is an issue but it is not the most immediate problem. Educate the membership, set in place concrete and accountable structures and root out the apoliticals and we will have come a long way through relatively straight forward measures. 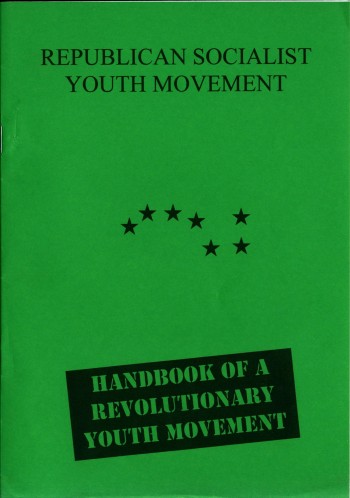