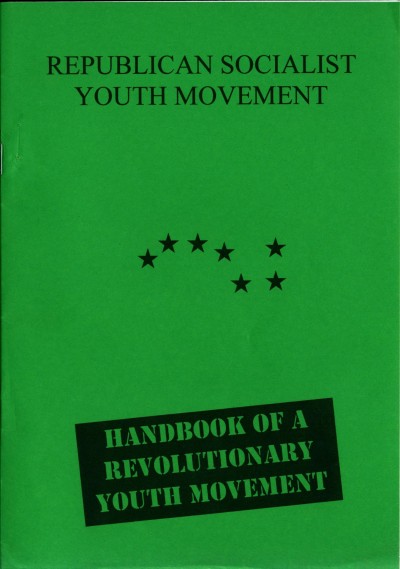 This 14 page document, a Handbook for the Republican Socialist Youth Movement, is of considerable interest. Under a range of headings it outlines what is the RSYM, what is Republican Socialism, the Good Friday Agreement, Loyalism, Religion, Internationalism, Activism and asks readers to ‘Join the struggle’. It notes that the RSYM ‘was founded in September 2005 following discussion between young Republicans and Socialists who were influenced by the irish Republican Socialist Movement. it was agreed that an active, educated and energetic youth movement was needed to further the cause of Republican Socialism in Ireland.’

The RSYM is a working-class revolutionary youth movement that stands in the proud political tradition of James Connolly, Seamus Costello, Karl Marx and V.I. Lenin. Our aim is to spread the ideals of Republican Socialism throughout the youth of Ireland, with our ultimate goal being the establishment of a 32 County Socialist Republic.

It quotes Seamus Costello as saying ‘It is still Britain’s objective to find and impose a political solution which will guarantee the continued protection of Britain’s economic and strategic interests in both parts of Ireland’.

It argues strongly against the GFA, but also argues that ‘strategies around conspiratorial militarism or economism will make little headway’. In relation to loyalism it suggests that ‘any co-operation with that section of the Irish working class must be on the basis of a principled political position’.

A range of quotes illuminate the text, including ones from Marx, Connolly, Bobby Sands and Guevara.

One striking aspect of it is how neatly it summates the Republican Socialist position as seen from the perspective of the IRSM. 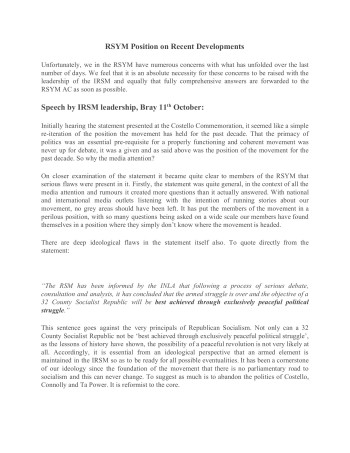