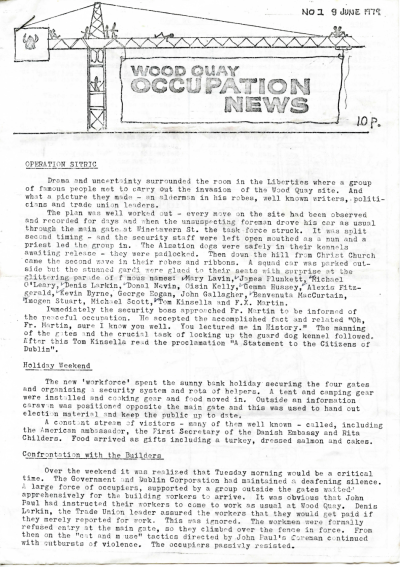 Adding to the collection of documents from the Wood Quay protests already posted on the Archive, here is a further example.

As noted the Wood Quay protests of 1978 and 1979 were not explicitly left-wing, however in the materials used to promote the protests and occupation there was an appeal to trade unionists and others. Individuals later prominent in the Labour Party and other groups were involved.

The tone of this piece is, perhaps at this remove, curious. The opening article in the four page A4 newsletter starts:

Drama and uncertainty surrounded the room in the liberties where a group of famous people met to carry out the invasion of the Wood Quay site. And what a picture they made, an alderman in his robes, well-known writers, politicians and trade union leaders.

Further on it continues after noting a ‘nun and a priest led the [first] group in’:

It outlines the events of the occupation (Operation Sitric). There’s also an explanation of the decision to occupy the Wood Quay site written by F.X. Martin. This notes the proximity of the local elections, to be held later that month. There are also pieces on ‘An American reaction’ to the occupation and a reflection on the ‘estimated 7,000 cars which will travel to WQ daily and will inflate the already choked traffic condition in the Quays’. 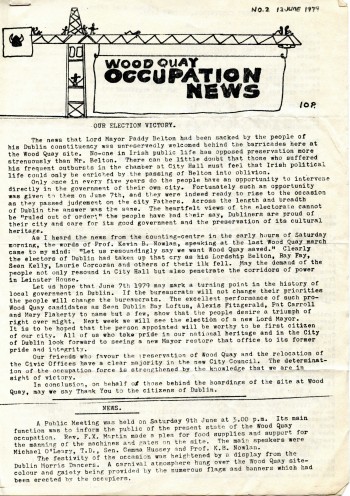 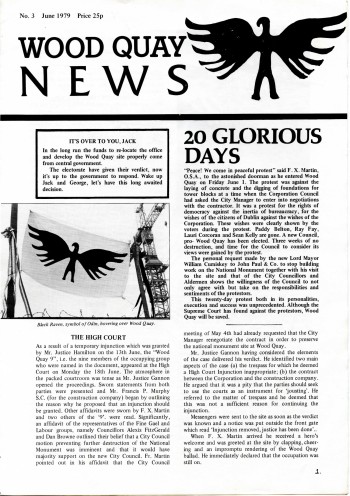 Wood Quay Occupation News (titled Wood Quay News after the first two issues) was published during the Wood Quay protests in the late 1970s, which sought to protect the archaeological site at Wood Quay from the intended City Council Offices development.…