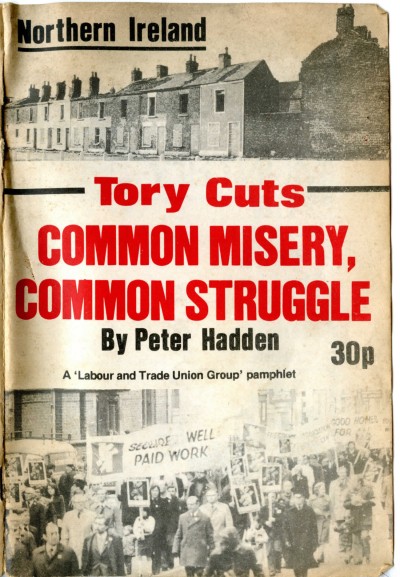 This is a very useful addition to the Archive, coming from the Labour and Trade Union Group, which was the name Labour Militant organised under in Northern Ireland (due to the lack of organisation there by either the British Labour Party or the Irish Labour Party.

A piece at the end of the pamphlet notes that:

The Labour and Trade Union Group is an organisation of socialists and trade unionists spread throughout the North. Since our formation in 1974 we have been campaigning consistently for WORKERS UNITY and SOCIALIST POLICIES. We believe that the trade union movement, with 300,000 members, has the main role to plain in achieving these goals.

It also references the Youth for Socialism campaign.

For Workers’ Unity against the Tory Cuts.

For a Mass Party of Labour.

The contents is arranged in sections, ‘Fight the Tory Cuts’, ‘Northern Ireland Poverty’, ‘Mass Action and a Socialist Policy’, ‘For A Labour Party’ and ‘The Border’.

On this last it notes:

In reality, the struggle for socialism in Ireland, NOrth and South is one struggle. It would be impossible to conceive of a socialist Northern Ireland divided from a socialist Southern Ireland by a frail and artificial line on a map.

The reunification of the country on a socialist basis would only be an extension of the unity ins truffle of the working class, North and South. Put in this manner, not posed as a sectarian and divisive issue, the quesition of the border can be faced by Labour, North and South.

The Labour and Trade Union Coordinating Group was founded in 1974 to campaign for a mass party of labour in Northern Ireland, with involvement from Militant. It initially organised within the Northern Ireland Labour Party (NILP), but was expelled in 1977.…