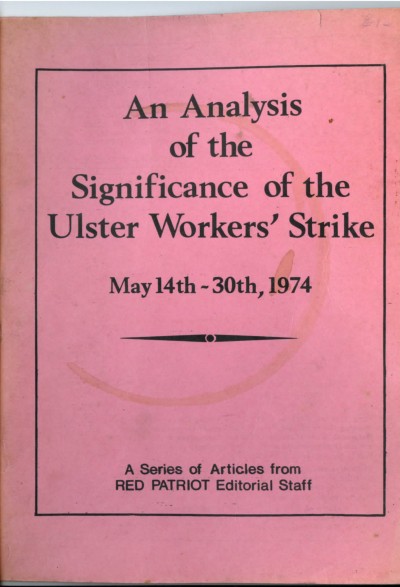 This is a fascinating document published in the aftermath of the Ulster Workers Council Strike. It is drawn from articles produced by RED PATRIOT staff and takes a very distinctive line on the strike. The articles include an overview of the strike which takes up most of the 70 plus pages document, A ‘reference article’ on the Northern Ireland Economy. Another on Sectarianism in Northern Ireland. A further piece on how ‘The ‘Council of Ireland’ is an Attempt to Further Unite the Irish Comprador Bourgeoisie against the Irish People. Finally there are two pieces comprising a Statement of the Dublin Branch of the CPI (M-L) on how ‘Anti-Sunningdale Strike Reveals the Strength of the Irish Working Class’ and one one entitled ‘Down With British Imperialism’s Latest White Paper’.

It argues strongly in favour of the strike ‘[where] Ulster workers dealt a severe blow to the British monopoly capitalist class, as well as to the Irish comprador bourgeoisie north and south. it was also a great step forward of the working class in Ulster, and strengthened their class consciousness, unity and revolutionary sentiment’.

It further proposes that:

At the beginning of the strike Craig, Paisley and West were the last people to appalled the workers because what they fear more than anything else is the workers taking the question of political power into their own hands, organising themselves and having done with the bourgeoisie. During the strike they were literally told on what basis the workers would have anything to do with them and were forced to accept…

It is not a matter whether Craig, Paisley and West have agreed to this but that they have no choice but to make definite concessions to the workers if they wish to retain any political credence.

Even this minimal use which the workers are putting them to will definitely be done away with before long as more and more workers see the necessity to join with the Communist Party of Ireland (Marxist-Leninist), the only party based uncompromisingly on the interests of the proletariat.

The document has harsh words for many different groups, including the Unionists, Loyalists, the SDLP and indeed both Official and Provisional Sinn Féin. Notable, however, is the hostility of its analysis in regard to the British and Irish Communist Organisation who also regarded the strike as a positive manifestation of working class unity. (See here for BICO’s analysis.)

A most interesting addition to the Archive and to the stock of documents from the CPI (M-L).