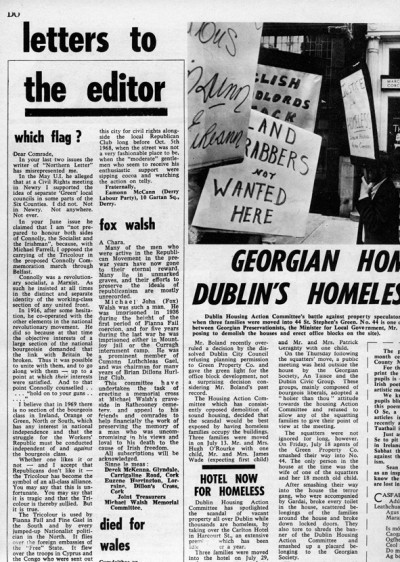 I’m indebted to the Workers’ Party for forwarding me this clipping which I asked about as regards the last Left Archive posting of the September 1969, United Irishman.

I’m also very grateful for the transcript. Very much appreciated.

In your last two issues the writer of “Northern Letter” has misrepresented me.

In the May U.I. he alleged that at a Civil Rights meeting in Newry I supported the idea of separate “Green” local councils in some parts of the Six Counties. I did not. Not in Newry. Not anywhere. Not ever.

In your June issue he claimed that I am “not prepared to honour both sides” of Connolly, the Socialist and the Irishman”, because, with Michael Farrell, I opposed the carrying of the Tricolour in the proposed Connolly Commemoration march through Belfast.

Connolly was a revolutionary socialist, a Marxist. As such he insisted at all times in the distinct and separate identity of the working-class section of any united front.

In 1916, after some hesitation, he co-operated with the other elements in the national revolutionary movement. He did so because at that time the objective interests of a large section of the national bourgeoisie demanded that the link with Britain be broken. Thus it was possible to unite with them, and to go along with them – up to a point at which their interests were satisfied. And to that point Connolly counselled …… “hold on to your guns …………”

I believe that in 1969 there is no section of the bourgeois class in Ireland, Orange or Green, North or South, which has any interest in national independence and that the struggle for the Workers’ Republic must be conducted independent of and against the bourgeois class.

The Tricolour is used by Fianna Fail and Fine Gael in the South and by every jumped-up Nationalist politician in the North. It flies over the foreign embassies of the “Free” State. It flew over the troops in Cyprus and the Congo who were sent out to serve imperialism.

As a result of all this I believed that a march through Belfast behind the Tricolour would not serve to assert the relevance of Connolly’s politics to Ireland today and I declined the invitation to speak at the final rally.

One final point: In a rather bizarre passage your correspondent writes – “Today we have all Northern opposition parties stating their honest-to-goodness belief in Civil rights for all. Where were they before October 5th 1968? Eamonn McCann, recognised by some as a sincere …. etc”.

If your correspondent had checked with Republicans in Derry he would have discovered that I and other members of the Derry Labour Party were on the streets of this city for civil rights alongside the local Republican Club, long before October 5th 1968 when the street was not a very fashionable place to be, when the “moderate” gentlemen who seem to receive his enthusiastic support were sipping cocoa and watching the action on telly.

The Derry Labour Party was founded in 1965 by Willie Breslin, Ivan Cooper and Dermie McClenaghan. It was composed of trade unionists, teachers and businessmen. Members were elected to the Citizens Action Committee. A number of candidates were elected at local election, including Ivan Cooper and John…