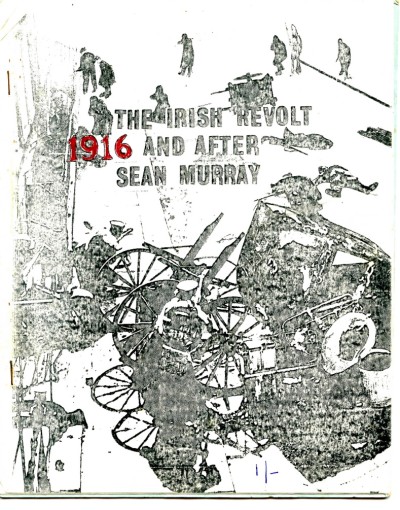 This is an interesting document from the 1960s Irish Workers Group, printed just before the 50th anniversary of the 1916 Rising. The IWG is covered here in this extensive post.

The Irish Workers Group (IWG) was formed in London in 1966, out of the divisions within the Irish Communist Group. It is argued by D.R. O’Connor Lysaght that the IWG was the first active Trotskyist group to establish itself in Ireland since the Revolutionary Socialist Party of the 1940s. This does not mean that the origins of modern Irish Trotskyism lie within the IWG – the SWM/SWP and Militant/Socialist Party, who arrived in the 1970s, are both outside its borders, while the Socialist Labour League had activists in Ireland contemporaneous to the IWP – merely that it is pivotal to any understanding of the Trotskyist movement on the island. Indeed, in terms of personnel, if not quite ideology, it is possible to trace the IWG in 1967 to the present-day Workers Unemployed Action Group in Clonmel, as well as Socialist Democracy.

It reprints a pamphlet written by Sean Murray around 1936 which provides an overview of the Rising and its aftermath and an account of attitudes beyond the shores of Ireland as to its importance. He includes assessments from the Independent Labour party and from Lenin.

The Introduction, by Gerry Lawless, which notes that by 1966 ‘a more detailed Marxist history of the Rebellion [had] not yet been written’, an omission which he argued was necessary to ‘expose the myth of the last surviving Commandant who later became the grave-digger of the Revolution’.

The struggle to write a working class history of those times has begun, as part of the work of building a revolutionary party of the working class in Ireland and this pamphlet is one of the opening shots in that struggle which must end by exposing the falsification of Irish history int eh interest of the Irish ruling class on one hand and King St. Moscow on the other, especially since at this time when many working class youths are beginning to question the lies and myths of Irish society.

He also writes that:

Any discussion on 1916 in the present period must centre on two questions. First the question of the so-called peaceful road to Socialism and national independence, and second, the question of the role of Marxists in the first stages of a revolution in Ireland today.

There is much more including a defence of the shooting of looters by the Irish Citizens Army and a critique of Connolly’s understanding of the ‘concept of the combat party acting as the ‘General Staff’ of the working class’. And he argues that this is a ‘failure for which the Irish working class suffered in 1916 and has suffered to this very day’.

The Irish Workers’ Group was a Marxist party established in 1966. Prior to this it had been called the Irish Workers Union and then the Irish Communist Group. It included Marxists and Irish Republicans including Gerry Lawless (later of Saor Éire). Two wings developed in the ICG including a Trotskist…