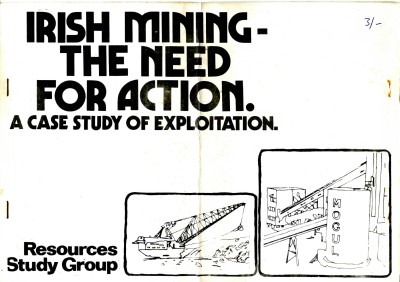 Many thanks to Peter Mooney for donating this document to the Archive – one of many from his collection that will be reproduced here in coming months.

This is an important document produced by the Resources Study Group. This group was established in Trinity College Dublin and as noted in an essay by Ruaidhrí Giblin - Ireland’s Natural resources: Documentation of A Robbery :

Towards the end of 1970, a group of activists set up the Resources Study Group (RSG). The main group was composed of Trinity students ranging in disciplines from economics and law to geology. The purpose of the group was to expose the massive profiteering by two Canadian firms who had major shareholdings in four of Ireland’s most productive mines.

The resulting document is a densely argued 50 pages long. It contains sections on ‘The Colonial Era’, ‘The Past 50 Years’. It also outlines an approach and some of the possible criticisms of it.

The introduction outlines the purpose of the document:

This pamphlet contains a detailed study of the mineral wealth of Ireland. Ten aspects of this very important industry were researched in great depth. What emerged amounts to a massive indictment of those who legislate in the name of the Irish people.

It also notes that while there was a perception of little or no mineral resources in Ireland:

If democracy means economic, and not just paper freedom, it would seem natural that such immense wealth be used for the benefit of the Irish people. In fact half a dozen North American mining corporations own and control this fundamental indicator of economic independence.

And it notes that:

Between the mid-1960s and the early 1980s (when the present ore reserves run out), these international corporations will ache recorded a net profit of £250-£300 million.

Practically none of this money will remain in Ireland. As the government proudly proclaims to intending investors, there is no restriction on the repatriation of profits from Ireland to foreign financiers. This means that during the estimated life of the mines £166-£200,000 per person employed in the mines will be taken out of the country in profits.

Most strikingly it asserts:

Under legislation introduced in 1967, these international corporations do not have to pay one penny in tax on this massive sum.

Tellingly it concludes by arguing that:

The penetration of the Irish economy by international finance, of which the mining takeover is but one example, affects all aspects of economic, political and cultural life in this country.

Dotted throughout the text are quotes from figures such as Pádraig Pearse that relate to resources – ‘The nation’s sovereignty over the nation’s material resources is absolute’.

Also included are advertisements from the IDA – various claims are highlighted, most notably one which says ‘No restrictions on repatriating profits’. There is considerable detail, as exemplified by company ownership structures and a comprehensive overview of the mining industry. As Giblin notes:

In their pamphlets, the group went as far as illustrating the network of inter-directorships at the top of the Irish mining corporations. FO the top ten companies who had a virtual monopoly on the industry, PJ Jugs and GT Smith, appeared on the board of five; M Pickard, SP Boland, M Gilroy and MV O’Brien appeared on the board of four and there were many other multiple directorships that showed the power and the money of the industry was concentrated in a tiny group of foreign and expatriate capitalists.

The RSG had considerable influence on political formations later in the 1970s. As noted in The Lost Revolution (Hanley and Miller):

The Resources Protection Campaign, launched in late 1973, had become a key area of [Official] Sinn Féin agitation. The RPC had emerged from a Sinn Féin initiative to bring together groups on the left in a broad campaign demanding the nationalisation of mining and energy rights, which were mainly being sold to US multinationals. The campaign initially drew heavily upon the work of the Trinity College Resources Study Group which had called for ‘nationalisation without compensation’ of Irish mines under the slogan ‘Chile took it back – so will Ireland!’. 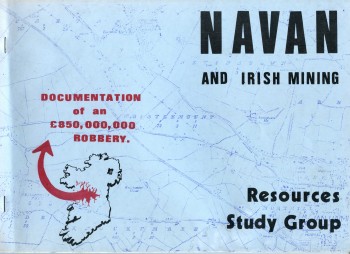 Resources Study Group in the archive