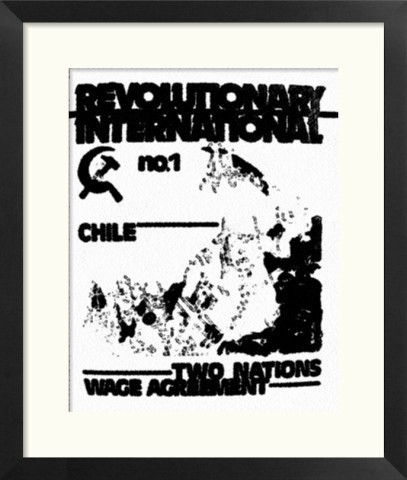 According to D.R. O’Connor Lysaght in his Early History of Irish Trotskyism, the League for a Workers Republic was formed in March 1968. Those involved in its foundation included Sean Matgamna, Peter Graham, Paddy Healy, and Liam Daltun. It arose out of a split within the Irish Workers’ Group. The LWR soon became a strong force within the Dublin Young Socialists. Early members of the LWR included Carol Coulter, Basil Miller, and Dermot Whelan.

In early 1970 a group within the LWR left the organisation. This group ‘supported the International Committee of the Fourth International (ICFI ) and demanded immediate affiliation of the LWR to the ICFI. This was unacceptable to a majority of LWR members, despite overall political agreement with the IC, because of a remaining lack of clarity on certain questions, and unease over various aspects of the IC’s politics, notably the positions of the British Socialist Labour League on Ireland’ (Workers Republic, April 1974). Dermot Whelan was among those who left in 1970. This group became known as the League for a Workers’ Vanguard, later simply Workers’ League. It was linked with the Socialist Labour League.

In the summer of that year (1970) Peter Graham left the LWR, and joined the International Marxist Group  which was the British section of the United Secretariat of the Fourth International . Peter was shot dead in October 1971. His body was found in a flat near the corner of St. Stephen’s Green and Harcourt Street. Peter had been involved at an unspecified level with the Saor Éire Action Group , and his murder, for which no-one was ever prosecuted, was rumoured to have been linked to a Saor Éire internal dispute. (Saor Éire were principally bank robbers, and had killed a garda, Richard Fallon , in 1970 during a bank raid.)

In 1970 the Young Socialists put forward a strategy for a new socialist labour party, one that would unite revolutionary socialists on both sides of the border. The resulting organisation was the Socialist Labour Alliance (SLA), which attracted support from various individuals and groups. According to John Goodwillie, the SLA was ‘largely comprised of intellectuals, who were more interested in debating socialism than in practical activities. Its ideological disputations increasingly immobilised it as an organisation, leading to an outflow of members… The situation was further confused by the Young Socialists themselves being immobilised by a struggle between the LWR and the “Left Opposition”, later to become the Revolutionary Marxist Group. Although less pervaded by arid dogmatism, they rejected the struggles of the working class as the primary area of interest and argued instead for involvement in the student movement, in the women’s liberation movement, in the fringes of the Republican movement.’

In 1972 there was a split within the ICFI, and the breakaway group, which was free of SLL influence, became known as the Organising Committee for the Reconstruction of the Fourth International (OCRFI ). The LWR affiliated to this breakaway group. Dermot Whelan rejoined the LWR in 1974, and wrote a pamphlet which outlined his analysis of the SLL .

Around Sept/Oct 1972 Brian Trench wrote an article for the SWM’s Internal Bulletin, (no.4), which gave an overview of the various left groupings in Ireland. He inferred that the LWR had less than twenty members. He found the LWR to be ‘seriously orientated towards the working-class movement’, although the praise came with the caveat that the group was ‘chronically sectarian and arrogant.’

In 1974, the LWR launched a theoretical magazine, Revolutionary International, which was sold outside the GPO on Saturday afternoons. In June of that year, the LWR called on people to vote Labour, with ‘no transfers to Fianna Fáil, Fine Gael, or Aontacht Éireann! Smash the coalition!” The address of the editor was given as 13 Lwr Camden Street, Dublin 2. Contributors included Carol Coulter, Dermot Whelan, and Brian Miller. The editorial said that in the previous two years, the group had become members of The Organising Committee for the Reconstruction of the Fourth International, and had undertaken ‘an investigation and criticism of the Two Nations Theory, a version of which [the group] held, and corrected our position.’

(The LWR had previously held that the northern Protestant population constituted a ‘nationality´rather than a ´nation´.)

The editorial also said that the Young Socialists, ‘which… took up a lot of attention and resources, now have a proper national committee and are bringing out their own paper.’

In June 1974 a newspaper called Young Socialist began publication. Its office address, 13 Lower Camden Street, was the same as that for Revolutionary International, and was published concurrently. It contained an article from the Drogheda Young Socialists, as well as a copy of the Young Socialist Manifesto .

The paper also mentioned that the group had ‘two representatives on the student bodies in Trinity College Dublin and one in U.C.D.’ ‘While we recognise that only under a Socialist workers government will education become a right and not a privilege’ it said, ‘we must fight to defend the gains already made and must carry the fight to the trade unions and workers’ bodies to force the government to restructure the education machine. It is the working classes who are suffering most under the present, corrupt system, and it is only with their support that we can force the government to act.’

To return to Revolutionary International, June 1974. The group was focused on national and international matters – including the national wage agreements, the North, militant republicanism, the crisis in international capitalism and its expression in Ireland, Britain and Europe, and the recent coup in Chile. The events demanded answers, and, nailing its ideological orientation to the mast, the editorial said that ‘only the Trotskyist movement, the living continuation of Marxism, can give those answers.’ A statement of intent was also given. It said:

‘In this magazine we will fight for scientific socialism (Marxism) among the advanced sections of the Irish working Class, and against bourgeois ideology in all its forms, whether religious or the pro-imperialist liberalism of a small section of the Irish bourgeoisie and its intelligentsia, represented by the likes of Conor Cruise O’Brien. We will take up and expose all revisions of Marxism which try to dress up the ideas, outlook and method of the bourgeoisie in left-wing and even Marxist phrases in order to make it palatable to the working class. We will fight for internationalism, against the isolationism born of history and fostered by the bourgeoisie, from which the Irish working class has suffered. This will include drawing the lessons of the struggles of the working class in other countries, and fighting for real solidarity and a revolutionary internationalist outlook among Irish workers, and against the nationalist prejudices fostered by the bourgeoisie and their agents. In the course of this we will bring reports and analysis of the need and the fight to rebuild the Fourth International, and will do all in our power to initiate and pursue discussions with all militants for a revolutionary international. This has particular meaning in the context of the fight of our international tendency for an open conference of all militants interested in the building of a revolutionary international, opposed to Stalinism, and pledged to defend the gains of the Russian Revolution.’

The June ’74 edition had an article on the Two Nations theory, written by Carol Coulter, which set out to undermine BICO’s claim to be communist. Drawing heavily on the writings of the BICO-led Workers’ Association for the Democratic Settlement of the National Conflict in Ireland (W.A.) ‘which despite its title, is composed mainly of students’, Coulter stated that the WA’s policy is summed up thus:

BICO, she adds, ‘is less blatant about their positions’, but she quotes from a BICO pamphlet, The Two Irish Nations:

‘The one nation dogma creates nationalist division in the working class, since it attempts to impose on the Protestant workers a nationality which they reject. The two-nation theory is the only basis for unity across national lines.” (p.39)

BICO drew heavily from Stalin’s definition of a nation. Essentially, Stalin’s analysis was that: ‘a nation is a historically evolved, stable community of language, territory, economic life, and psychological make-up manifested in a community of culture…. It is only when all these characteristics are present that we have a nation.’ [for more on this see here ] BICO took as their basis the uneven industrial development of the island in the nineteenth century, with industry taking off predominantly in the North. Coupled with a shared language and psychological make-up, the Protestant people of the North therefore constituted a nation. Coulter countered with reference to Lenin on nations, particularly his Critical Remarks on the National Question , where he says: ‘if we want to grasp the meaning of self-determination of nations, not by juggling legal definitions… but by examining the historico-economic conditions of the national movements, we must inevitably reach the conclusion that the self-determination of nations means the political separation of these nations from alien national bodies, and the formation of independent national states.’

If, for example, the Protestants wanted independence from British imperialism, which undoubtedly oppresses them, and also their own state, if a national democratic movement existed on this basis, pledged to independence and a genuinely democratic state, if they were opposed to existing oppression, then of course no Marxist could or would argue with their right to self-determination. But this is not the concrete reality of the case. Protestant nationalism, if such it can be called, is not primarily concerned with democracy, quite the opposite, it is concerned with privilege, with the maintenance of inequalities. It is not concerned with fighting existing oppression, but with state institutionalisation of oppression. It is not concerned with independence from imperialism, but with participation in the spoils of imperialism. It bears no resemblance whatsoever to the nationalism in which Marxists see a progressive content, a “general democratic content”. The relationship of this kind of “nationalism”

The LWR also opposed the national wage agreements. In an article written by Dermot Whelan, it called the Employer-Labour Conference:

‘a completely corporatist body, and in structure and aim … no different from the syndicate organisations of fascist countries such as Spain and Portugal. Through this body and the National Agreements it has come out with, the ruling class since late 1970 have shackled the entire workers’ movement to the needs of Irish capitalism, have begun to pauperise and weaken the resistance of the workers and effectively turned the unions into policemen of the state and employers.’

In May 1975, Workers Republic carried an article on recent student elections in TCD. It mentions two of the candidates, Carol Coulter and Anne Connolly.

The LWR also participated in the Socialist Labour Party, and although it never formally dissolved, by the late-1980s the group had ceased to have any form of a noticeable presence.

The League for a Workers’ Republic (LWR) was a Trotskyist organisation in Ireland. […] It was founded in 1968 by members of the Irish Workers’ Group, which was mainly centred on Irish emigrants to Britain and was itself the result of a previous split in the Irish Communist Group between those, such as Brendan Clifford, who leaned towards Maoism and went on to form the Irish Communist Organisation (ICO), later the British and Irish Communist Organisation (BICO), and those such as Peter Graham, Sean Matgamna (John O’Mahony) and Gery Lawless who were Trotskyists. The LWR was begun by members unhappy at the low level of activity of that organisation in Ireland and the fact that the IWG leaders were based in London.