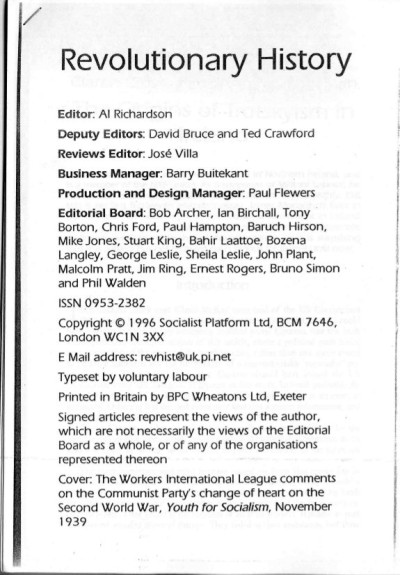 Many thanks to Jim Monaghan for the following.

“…is an independent, non-sectarian socialist publishing venture of militants and historians of the British far left — opposing both Stalinism and Labourism /reformism — aiming at the information and education of a new generation influenced by Trotskyism and its heritage in the Marxist movement. Socialist Platform publishes labour movement history studies hardly to find elsewhere or overlooked by other publishers, at affordable prices. It maintains an archive and a library and closely co-operates with similar working archives and publishing endeavours abroad, such as the Institut Léon Trotsky in France.”

Its current online home is here .

As the introduction notes:

Ciaran Crossey works in the public setvice in Northern irealnd, and is a member of the MSF union. As a supporter of Mlitant Labour, he has written number of articles for the Militant Irish Monthly, but his is his first full-length historical essay. James Monaghan lives in Dublin, and has been active in the Trotskyist movement in Ireland since the early 1970s. We are sure our readers will appreciate their conscientious research and documentation, as it is surprising that this subject has not received such serious treatment until now.

The essay itself is 26 pages long and considers the historical origins of Trotskyism in Ireland. It starts with Paddy Trench who it identifies as the first active supporter of the Trotskyist movement in Ireland, that being Paddy Trench who joined the Marxist Group, and worked inside the Independent Labour Party. It notes that there was barely an handful of Trotskyists in Ireland through to the Second World War, and these mainly worked through the Irish Labour Party.

It continues by examining the Second World War/Emergency years and in particular the Workers International League which sent five members to Dublin to organise. These included Jock Haston and Gerry Healy. Again, contact was made with the left wing of the Labour Party and the younger members of the Dublin IRA. Interestingly the essay asks did the WIL ‘really establish anything in Dublin’?

The last section considers the disintegration of active Trotskyism in Ireland with the ‘demise of the Revolutionary Socialist Party in 1948’. And it argues that ‘Marxism as an organised force, was absent from the Irish political scene for the next 14 years’. Some might take issue with the bluntness of that last statement, pointing to other Marxist strands, but certainly Trotskyism as an significant current faded away, perhaps as the focus shifted to London.

Some illuminating information is uncovered in this essay and it points to the need for yet more research on the issue.

Socialist Platform is a publisher of labour movement history studies. Its aim is to bring to activists, students and scholars books and pamphlets at affordable prices on topics that are often overlooked by other publishers.…

See Socialist Platform in the archive

Revolutionary History is a magazine dealing with the history of the revolutionary socialist movement, from a mainly Trotskyist viewpoint. It does not belong to, or support any trend within the Trotskyist movement. Non-Trotskyist opinions are included in our Editorial Board. All socialist tendenci…

See Revolutionary History in the archive