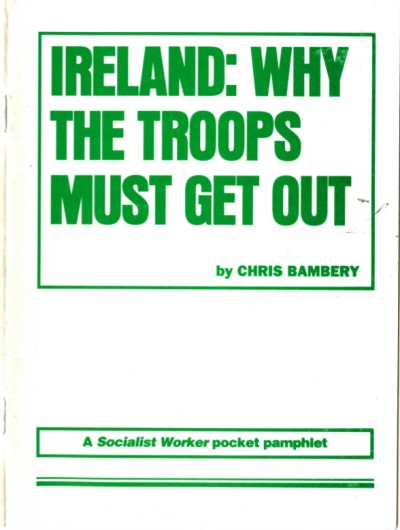 This is a short eight page document issued by the SWP UK in 1992. Written by Chris Bambery it outlines why, in the view of the SWP (UK), the British Army must leave Northern Ireland.

The introduction starts by asking the reader to:

Imagine the town you live in. Imagine that each day heavily armed troops patrol your street. Each afternoon, as school comes out, troops train their guns on the children and their mothers. When you drive to work or to the shops your car is halted at a check point and searched. In the sky helicopters monitor movements below. At night their searchlights scan the streets.

This is real life for the Catholic Community in Northern Ireland. Yet this society is supposed to be part of Britain, no different John Major’s Huntingdon constituency. In truth it is a world apart.

Once you begin to understand the reality of NI it is not so surprising that ordinary, working people fight back against the security forces and the system they uphold.

Again and again we are told by the British government – whether Tory or Labour – that the violence in Northern Ireland is senseless. It is the product of a few criminal minds, of a few psychopaths. We are told that British troops are trapped in the middle trying to keep two warring sides apart.

These argument have been carefully woven to conceal the truth. The divisions in Northern Ireland have been carefully nurtured and maintained by Britain, just as they used a policy of divide and rule in the Indian subcontinent, in South Africa and in Cyprus. A continued Briths presence can offer no solutions to the problems of Northern Ireland. There can be no peace there until Britain gets out.

The rest of the document is divided into various sections, ‘Why the British troops went in’, ‘The reality of the Northern Ireland State’, ‘Have Things Changed?’, ‘Violence Who’s to Blame?’ and so on. It’s interesting to read the outline of the history of the conflict, which reiterates the idea that ‘in 1969 the IRA was a tiny band of people on the sidelines of events’ and that ‘they had no guns to fire back with even if they wanted to. Angry Catholics wrote ‘IRA-I Ran Away’ on Belfast walls’.

Interestingly the SWM in Ireland was as late as 1974 calling for a vote for both Sinn Féin’s. 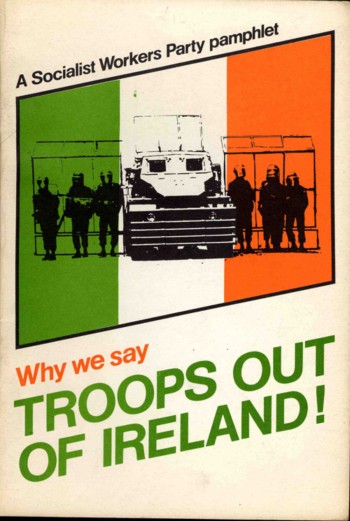 The Socialist Workers Party (SWP) is a far-left party in Britain. Founded as the Socialist Review Group by supporters of Tony Cliff in 1950, it became the International Socialists in 1962 and the SWP in 1977. The party considers itself to be Trotskyist, although Cliff and his followers deviated from…