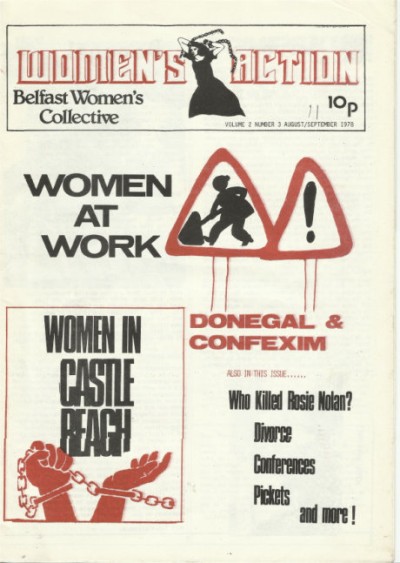 Many thanks to Alan Mac Simoin for scanning and forwarding this document to the Archive.

Although politically broad based, the Belfast Women’s Collective document exemplifies a split between the BWC itself and those who were more Republican or pro-Armed struggle. It doesn’t ignore the latter, for example there’s a piece on ‘Women in Castlereagh’ and other pieces but it has a very broad range of articles in its 12 pages. These include pieces on Women in Donegal, shorter pieces on the Cladyknits Dispute, another on the Confexim strike and an overview of the then recently introduced divorce law in the North.

Perhaps its Statement of Aims is most useful int terms of giving an overview of the BWC and the newsletter.

Today Irish women are among the most oppressed in Europe. This oppression something which pervades all aspects of our life. Yet because it is a condition we have been accustomed to all our lives much of it is taken for granted. Indeed we are encouraged to believe that it is the ‘natural’ state of affairs___that girls should be taught to be gentle and cautious while boys are encouraged to be aggressive and adventurous that a woman at work should receive lower wages that once we marry our place is in the home where we are held responsible for providing domestic services and caring for children, that it is not for the woman to decide whether she wants to have children or how man. In other words we are taught to think that ‘nature’ has made it a ‘mans world’.

But the oppression of Irish woman is not ‘natural’! IT is POLITICAL and it is only by seeing it as a POLITICAL condition related both to National and Class oppression that we can organised to change it. Within this struggle it is very important that women organise themselves to ensure that their demands are heard.

The Belfast Women’s Collective therefore has two functions. Firstly to publicise the reality of womens oppression and secondly to organise and agitate to change society.

The struggle against womens oppression cannot be restricted to a parliamentary lobby for legal reforms. The Equal Pay Act and other pieces of legislation which have recently been introduced North and South have shown very clear that formal legal equality is of little use to women as long as the overall political system is one based on inequality oppression and exploitation. At present the actual hardships of womens daily lives are bing increased by mass unemployment by price rises by cuts in social services and by increased political repression.

The struggle for womens liberation in Ireland must the fore be seen within the perspective of a struggle to overthrow both National and Class oppression and establish a socialist society.

And in a sidebar it argues that:

We are fighting for

Interestingly there’s also a piece on the Socialist Labour Party and in particular its attitude to women and to reproductive rights. There’s also a report form a Domestic Violence conference in Greystones hosted by the Poverty Action Project and Women’s Aid and another report which gives a genuine insight into official attitudes to childcare in relation to a one-day conference on childcare organised by the EOC and the Northern Committee of the ICTU where it is noted that there was no creche for those attending it.

Women’s Action was published in Belfast in the 1970s. It appears to have been initially a Socialist Women’s Group publication, later continued by the Belfast Women’s Collective when the latter group was formed.…

See Women's Action in the archive