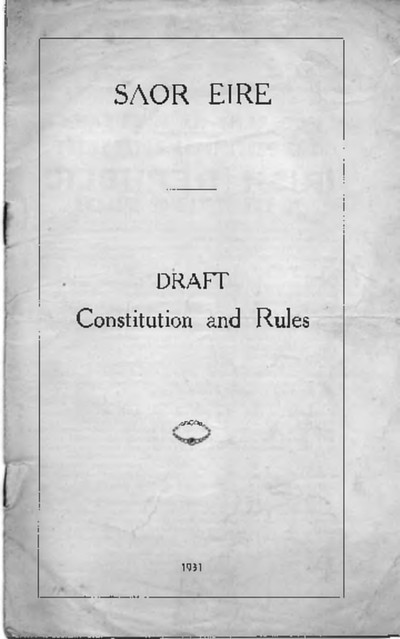 Many thanks to Conor McCabe for scanning and forwarding this to the Archive.

This is a particularly significant document. As noted here:

Saor Éire was a left Republican and communist organisation founded by members of the IRA in 1931. Notable among its founders were Peadar O’Donnell, Frank Ryan and George Gilmore.

It was described as “an organisation of workers and working farmers”, and brought together members of the Revolutionary Workers’ Groups (RWG), which was chiefly Dublin-based, and the Irish Working Farmers’ Congress (IWFC), which had been established by O’Donnell in 1930 and was associated with Krestintern, the Peasants International.

In October 1931 Saor Éire was banned (along with the RWG, IWFC, and other left Republican and communist groups) and collapsed after a short-lived existence.

The short document reproduces the Proclamation. The Preamble notes:

On that Proclamation we take our stand and we call to the “ incorruptible custodians of the tradition and struggle ” to collect around committees of themselves so that we may move solidly forward to our battle-ground.

In 1916 British rule was exercised nakedly by British officials. Power was in the hands of planters and landlords and their associates in banking and industrial combines. The mass of the Irish people were in bondage to the few and an army and a police force were stationed here to see that the slaves behaved and made their masters rich. The. State was the association of rifles and batons, jails, bailiffs and thuggery, with the wealth of the aliens and traitors, to rob and strangle a sovereign people.

The document makes a clear appeal to workers:

The ultimate backing for our enemies will be sought among the demoralised upper stratum of the workers, among the small owners and traders, and to this section we would especially direct an appeal to rescue them from the illusions that are being developed among them. The whole experience of the past few years points inevitably to the fact that small industries can’t last and small traders can’t live. They must hire into the services of the combines and become their yeomen, or they will take their place as the comrades of free men and women striving to achieve a freely functioning Irish Republic and the organisation of a Workers’ State.

And in its Constitution and Rules it notes in its first two ‘Objects’:

(1) To break the connection with England and secure for the Republic of Ireland free expression of its National Sovereignty.

(2) To vest all political power within the Republic in the Working-Class and Working Farmers.

A profoundly radical document. Again many thanks to Conor who also made the text searchable.

Saor Éire was a left Republican and communist organisation founded by members of the IRA in 1931. Notable among its founders were Peadar O’Donnell, Frank Ryan and George Gilmore.…