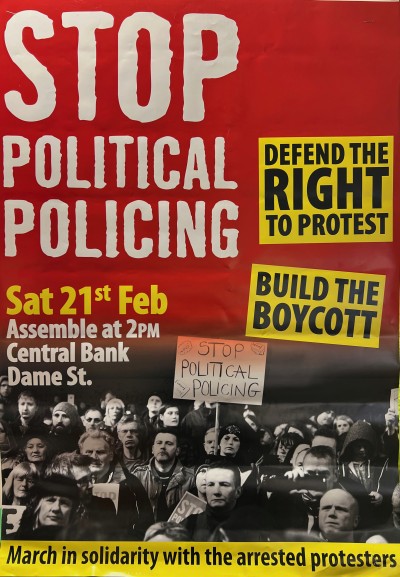 This is a fascinating poster, uncredited but from the broad AAA, anti-water charges campaign, and relating to a protest to be held in February 2015 in support of the Jobstown protest in Tallaght the previous November when then Minister for Social Protection, Joan Burton of the Labour Party, was prevented from leaving for two hours. As a report from the Irish Times noted in advance of the protest :

A protest against alleged “political policing” will take place in Dublin on Saturday, the anti-water charge campaign has announced.

The demonstration, which will start at the Central Bank at 2pm, comes as almost two dozen people have been arrested in connection with a rally that took place in Jobstown, Co Dublin, last November.

Organisers say 23 people have been arrested as part of the investigation into the protest in which Minister for Social Protection Joan Burton was barricaded inside a car for more than two hours.

A series of protests have been held in recent days, which organisers said were to highlight political policing targeting the anti-water charge movement.